Dave Freer scientist and SF steampunk author, talks to Nalini Haynes of Dark Matter.  David Freer‘s interview is in MP3 (podcast) format at the bottom of this page. 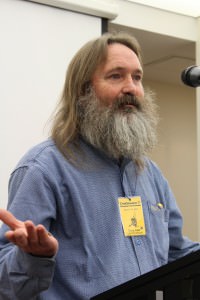 I caught up with Dave at Continuum 7 in 2011, where he was a guest of honour.  Dave’s speeches were entertaining, showing that even scientists can have a sense of humour 😉  I particularly liked Dave claiming Sir Terry Pratchett’s dwarvish anthem as his own in his guest of honour speech – a reference to the beard.  Dave’s interesting background and sense of humour inspired me to ask for an interview, something I prefer not to do unless I’ve read the author’s work.  An opportunity to interview Dave might not have come so easily later.

During the interview Dave mentions a number of his works, specifically citing Rats, Bats and Vats, a comedic science fiction work where Dave collaborated with Eric Flint, available free from the Baen Library.

In this interview Dave mentions that some of his books are available as free ebooks from Baen, his publisher.  This is a great way to introduce new readers to an author, especially in the current economic crisis with people being laid off left, right and centre in Australia.

UPDATE:  David Freer‘s latest alternate history book, Cuttlefish, is to be released mid-2012. I’m currently reading Cuttlefish, where the protagonist is fleeing Imperial Intelligence in a drowned London in a submarine.  I’ve only just started, but it’s good so far 🙂