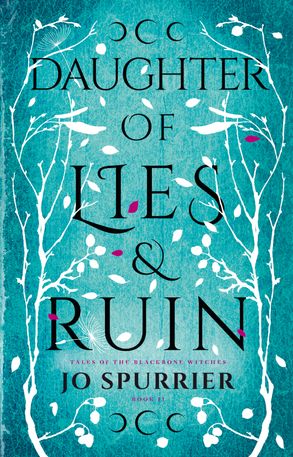 In A Curse of Ash and Ember (review here), a summons to work ensures Elodie’s parents allow her to leave home to travel to the mountains to take up service with Mrs Blackbone, a lady. Or so they believe. Turns out Mrs Blackbone is an evil witch who’s dead by the time Elodie arrives but perseverance ensures Mrs Blackbone’s successor, Aleida, accepts Elodie’s service. But Mrs Blackbone’s ghost isn’t happy with either of them.

Afterwards, Elodie and Aleida spend the summer brewing potions and travelling, partially to sell them, partially to escape the scene of many crimes. They’re on the road when we meet them in Daughter. So they meet (one of) the titular daughter/s, a rebellious teenager living in a convent against her will. A liar and a rebel who brings ruin in all of her silly endeavours.

But she’s small fry compared to the powers amassing in the area.

Aleida is another titular daughter, the acquired daughter of Mrs Blackbone. This heritage has left its mark and a reputation despite being relatively young, only in her twenties. Aleida is a mass of contradictions: she donates blood money to nuns before harvesting life energy of ‘death row inmates’ to do what is needful.

As Aleida’s apprentice, Elodie is also complicated. Superficially, Elodie may appear simple but her familiar has surprising potential and her fireballs are the envy of the Firestarter (Stephen King). She is the fearful one who wants to fix everything but doesn’t want to pay the price.

Thus Aleida and Elodie are an engaging team who challenge one another. And the monsters they face are horrifying: everything from a griffon to an extradimensional monster/mythological demon.

Daughter of Lies and Ruin could have been written with me in mind: it’s the new witches of Discworld without playing in the Discworld sandbox. I adore these powerful yet developing witches, their accumulating coterie and their struggles with morality while saving the world. And, when I went online to find a cover image, I realised: THIS BOOK LAUNCHES ON MY BIRTHDAY. How perfect is that?

If you want more discussion, I interviewed Jo Spurrier a few years ago. Also, you can read on… or just go and read the book now.

Daughter of Lies and Ruin is set in a patriarchal society where the local lord has the power to imprison a 16 year old girl in a convent without a trial just because her father has gone missing. That teenager has wit and willing to cause utter chaos, just like teenagers in real life. (Ask any parent.) So we have patriarchy vs power even if society does not recognise the power of women.

Furthermore, normal rules do not apply to Elodie and Aleida because they’re witches. Even the lord listens to them, sometimes because he’s bewitched but at others because THEY’RE WITCHES DAMMIT.

So patriarchy, yeah… but POWERFUL WOMEN. Love it.

This book passes the Bechdel test. And then raises the bar. The witches talk about sex and consequences but the idea of a romance? Nah. They’re too busy being kick-ass and awesome. So men are just people when they talk to each other. The witches and these stories remind me a little of Cadfael except they’re younger and the stories are fantasy not medieval murder mysteries.

Tolkien trapped Gandalf with the Balrog because Gandalf was too powerful. Magic requires consequences to imbue balance and limit potential. Other good stories create tension by magic having a cost to balance the benefit. Likewise, Daughter of Lies and Ruin’s magic has costs. Users  become fatigued after using powerful magic. Their bodies require food to replenish calories used. And yet eating too much can prevent magic use. It’s complicated. It’s awesome.

Minor characters may have disabilities in Daughter of Lies and Ruin but Aleida lives with a disability that shapes the story. When Aleida killed Mrs Blackbone, the evil witch’s deathcurse gave Aleida dog feet. Aleida usually hides these feet beneath her long skirts and uses a staff to compensate. Sometimes she magics them away so she doesn’t appear so vulnerable, but this magic exacts a price, leaving less capacity for other magic and fatiguing her. Thus, Aleida usually gets around on dog feet while using a staff.

Aleida also generally suffers from fatigue and poor health due to the deathcurse. It’s a little like she has chronic fatigue syndrome or something similar so she has limited capacity then needs recovery time. Potions help but those potions — depending on the type — may also exact a compensatory cost.

Some may decry the trope of disability being a curse. This trope, and particularly the way Spurrier handles it, is worthy of at least a lengthy essay. There are arguments for and against. Personally, I don’t think my disability is the biggest problem I face: it’s other people’s bigotry, refusals of disability access, retaliation for asking and, of course, that professor who assaulted me for being disabled while on the phone in the refectory and the university that expelled me for talking about their unlawful behaviour. I can read, write, research, live a fairly-ish normal life. What I can’t deal with is bullies and bastards whose impact on my life feels similar to old Mrs Blackbone’s impact on Aleida.

The consistency and realism with which Spurrier writes disability is heartwarming. You’d almost think she has a disability herself. [

I could wax lyrical about this novel but I’ll end this review here instead of risking spoilers. Daughter of Lies and Ruin is not just the perfect birthday gift for me, it’s a gripping adventure with monsters and inhumane invaders (some of the monsters are people) and witches who stand outside the patriarchy wrestling with their demons before wrestling with someone else’s demons.

Read Daughter of Lies and Ruin if you enjoyed the Discworld witches, Laini Taylor’s Daughter of Smoke and Bone and similar novels.