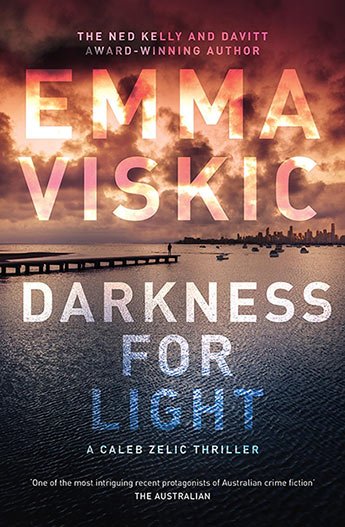 And Fire Came Down won the 2018 Davitt Award for Best Novel. It was also longlisted for the International Dublin Literary Award.

Q and A with Emma Viskic

Darkness for Light continues with your leading man Caleb Zelic, can you tell us a little more about it?

After a rough few years, Caleb is beginning to get his life back on track – he’s in therapy and working things out with his ex-wife. He’s also reconnecting with the Deaf community, which he hasn’t been a part of since his school days.

After some tough times, things are going well for Caleb. But he can’t escape his past. A potential client is murdered and a young child kidnapped. To save the girl’s life, Caleb is forced to work with his double-crossing business partner, Frankie. Risking everything in the process.

Your leading man is deaf, and you have previously discussed the immense responsibility you felt in doing justice to the deaf experience. In fact, you even learnt sign language and took a lip-reading class – can you tell us more about that?

Good writing is about empathy, but it’s also about knowledge, and I knew I couldn’t write Caleb’s character without knowing what his life would be like. I spoke to a lot of deaf and hard-of-hearing people, then did an online lipreading course, shoved a pair of foam earplugs in my ears, and went out into the world to test my skills. And quickly discovered I didn’t have any. One disastrous attempt at ordering coffee ended up as a scene in Resurrection Bay.

I never became good at lipreading, but my experiences helped me craft Caleb’s character, and understand how difficult things like beards and mumbling are for lipreaders.

The next step was learning Australian sign language (Auslan). Because Caleb is determined to live in the hearing world, I wasn’t sure if he would use sign language. Then I realised in my first lesson that it was perfect for him. Auslan is such an expressive language, it allows Caleb to be at ease in at least one area of his life. It also reflects his relationships, as the people who love him, make an effort to sign with him.

Why was it so important to you for this character to be deaf?

The inspiration for Caleb’s character traces back to my childhood. Some is from a profoundly deaf girl I went to school with, but a lot of it is from my family. None of them are deaf, but I come from a very small family and my only living grandparents didn’t speak English. As I didn’t speak Croatian, our inability to communicate loomed pretty large in my life. Communication and isolation have been consistent themes in my writing since I was child. Caleb’s deafness also adds a lot of tension to the books. Although it makes him an incredibly observant investigator, he can also miss important information if he misreads a word. And there’s always a chance someone could be sneaking up behind him…

You studied as a clarinettist at the Rotterdam Conservatorium in the Netherlands and then worked professionally as a musician for a decade, and now you write for a living – do you prefer one over the other?

Music and writing are entwined in my mind. They’re both about rhythm and pace, emotion and communication. I also read my work aloud the same way I practise the clarinet, reading and rereading every sentence and phrase until I find the right structure. And as an introvert, they’ve both got the added bonus of requiring hours alone in a room!

Will this series continue? If so, how many books do you foresee?

There’s one final Caleb Zelic book in the works. I’d always envisaged it as a short, tightly-held series, and the emotional arc of the characters is playing out quite naturally over the four books. Having said that, I’m not at all sick of Caleb yet, so I can easily imagine writing another series in the future.