‘Dark Wings, Dark Words’ follows Jaime Lannister and Brienne of Tarth as Brienne tries to get Jaime safely to Kings Landing to reunite him with his family. And Jamie tries to escape. Because it’d be better to cause a disruption and come to the notice of the hundreds of people in the Seven Kingdoms who want him dead than helping Brienne get his self safely home.

Arya and her two companions traipse across the countryside, trying to head north either to Winterfell or to the Wall where Jon Snow would provide sanctuary.

There’s a lot of countryside in this episode. And no dragons. Not a one. No Blondie (Daenerys) either.

Nor are there any boobs. Shock!

The only sex scene is between Tyrion and his sex worker/sweetheart, Shae, who — it’s implied — goes down on him. However, no boobs nor even manly chests make appearances. Joffrey strips off, revealing his weedy white chest but only during a fitting for his wedding attire.

Oops. I forgot: Theon Greyjoy’s manly chest and bulging bicepts made appearances but that is in torture scenes so does it count? I guess it depends on your tastes.

It’s nice to see more emphasis placed on the story and less on cutting the story to fit in more boobs and butts. However, certain characters’ costumes feature lots of cleavage and side boobs. Margery Tyrell in particular.

I’m not sure what to think of Margery. After Sansa tells Margery that Joffrey is a monster, Margery handles Joffrey with aplomb. Is she another psychopath or a very intelligent woman bent on survival and, perhaps, looking after her people like Tyrion managed in the second book? Or, as the minion suggests, is she another Moriarty? Only time will tell.

‘Dark Wings, Dark Words’ isn’t completely consistent with how it happened in the books but I think it’s a pretty good interpretation for the screen up until the Brotherhood’s dinner. However, to make a good comparison between the books and the TV series I’d need to re-read the books but I just don’t have the time: I have my own novel to write AND piles of books from publishers threatening grievous bodily harm if they topple over.

Game of Thrones is on a roll and so am I. ’Scuse me. Another zode is queuing on the telly. Ciao. 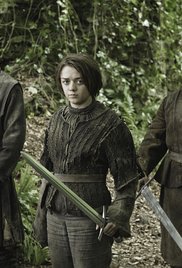