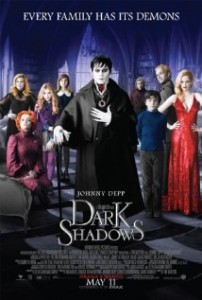 Last night hubby and I watched Dark Shadows the 2012 movie directed by Tim Burton and starring Johnny Depp.  This is the tale of Barnaby Collins who, after losing the love of his life, dies to rise again as a vampire.  The witch who turned him into a vampire trapped him in a coffin bound with chains for nearly two centuries before being dug up by some builders preparing foundations.  Victoria Winters was abandoned by her parents, consigned to a mental health institution.  Freed, she arrives at the Collins’ estate seeking work under an assumed name, with the intention of becoming governess to David, a difficult child.  Victoria appears to be the reincarnation of Barnaby’s lost love whose name was also Victoria.  Enter dysfunctional descendants, Barnaby screwing around with a few women including the witch who trapped him centuries ago while – presumably – pursuing Victoria with whom he’s smitten at first sight…

After watching Dark Shadows, hubby and I started to analyse the movie.  This is a new habit we’re increasingly developing as our discussions inform my reviews.  Last night I felt we were a bit like David and Margaret from At the Movies with our banter, although David gave Dark Shadows 3 1/2 stars like Edward and Margaret gave it 4 stars.  I told Edward that I’d give Dark Shadows 3 stars then wondered if I was too harsh when I was the lowest rating reviewer.

Dark Shadows seems to have an intricate plot – something I enjoy – but instead of weaving threads together throughout the story, the movie is more a series of snapshots of events.  David Collins appears early in the movie only to be almost forgotten until the conclusion where he returns.  Carolyn, the daughter of the house, has a surprise in the conclusion that I don’t think was hinted at until the big reveal – this is usually considered cheating in storytelling.

Set in 1972 the year after the TV series of the same name finished, I’m not sure if the movie is the re-boot/revival it appears.  I’ve tracked down the Australian ‘Collection one and two’ of the TV series but it appears that this does not include the beginning as does Collection One as advertised on Amazon.  The DVDs are also in NTSC instead of PAL so it will be an inferior image; the series is so old, not filmed in high quality options available today, therefore the format is probably not going to make a huge difference.  I’ve had technical difficulties playing the DVDs of the TV series as well, so I’m problem solving instead of viewing.  Not impressed, but Amazon in the US rates the TV series at 5/5 stars and IMDB rates it at 7.8/10, higher than the 6.4/10 stars given the movie, so I’m sorely tempted to purchase the coffin boxed set of the entire series.  When it comes down in price.

I expect the movie is an attempt to summarise the TV series, which is usually not a good idea for a novel of reasonable length or a TV series.  This TV series had a grand total of 1,225 episodes so any attempt to summarise even key plot points would detract from the storytelling.  If it’s worth doing, it should be worth doing well; in my opinion this would mean a series of movies or another TV series.  Either that, or leave well enough alone so people can enjoy the classic series.  Not having watched it yet, I’m not biased about this series but I am biased against reboots, relaunches, re-imaginings and anything that rips off or reruns old stuff – especially old stuff that was done well – instead of creating something new.

It’s a fun movie, rated PG with a sex scene that is played for comedy without nudity.  I think I’ll stick with my three star rating for the movie and keep hunting down the TV series.