I have created a monster.  My very own monster.

Once upon a time Dark Matter was mine! Mine! ALL MINE!

I recruited help from the local science fiction and fantasy scene to provide reviews where I could, and hubby (AKA The Minion) provided proof reading and minimal tech support.

When I say ‘minimal’ I really mean minimal.  He supported MY COMPUTER.  He doesn’t know how to use InDesign so he couldn’t provide any tech support for actually creating Dark Matter.  As I struggled with links he started to help – the font size was hell and InDesign seemed to randomly reassign links, much to my chagrin – but I was the driving force and general dog’s body.  Hubby would proof read on the train while commuting for work, and sometimes at home.  He’d also accompany me on the occasional interview if it was outside of work hours, and he’d be pack horse and gopher coffee at expos.  But this was the extent of his involvement.  It seems like a lot – indeed, it is a lot when you consider that he has a job as well – but this was a small proportion of the time and effort that goes into Dark Matter overall.

Nine months later – YES IT TOOK NINE MONTHS, as if it was a REAL BABY – the website was launched.

For those who saw the website back then, you may have noticed that the IT monster built it using WordPress nested inside another program, so the damn thing had TWO SCROLL BARS.  I almost cried.

The number of emails I received telling me my website was broken made me want to tear my hair out!

Even before those emails, Darren Turpin of Angry Robot publishing house took the time to send me some emails with details of what the problems were, why they were problems and HOW TO FIX THEM.  (YAY Darren!)  But knowing what and why and the THEORY of how still meant that a lot of work needed doing, including learning new skills in order to rebuild the website from scratch.

After four months I said I was going to rebuild the website myself.

I was VERY HAPPY.

My next goal was to learn how to do EVERYTHING myself so I don’t have to wait on anyone and I’m completely independent.  Since then I’ve learnt a bit of search engine optimisation, html, website organisation and more but there is still more for me to learn.  There is always something new, especially when I ‘traded in’ an ‘upgrade’ to Adobe CS6 for a camcorder enabling on-site video recordings and MP4 in-person interviews.

The IT monster struck again.

Not only have I not managed to have MP3 editing handed over to me for MY zine, but MP4 editing has mysteriously been usurped by the IT monster.  😀

Hubby, who up until Armageddon, had never operated a camcorder and very rarely taken photos in our 21 years of marriage, WANTS to do the video editing.  He’s found a program, he’s bought it, he’s learnt how to use it – and this is why Rachel Caine’s interview has taken 3 days to be processed.  NO, folks, it had NOTHING to do with the fact that I had the flu.  It is because the IT monster WANTS to do the video editing, he already has a day job AND HE’S A PERFECTIONIST.  That’s right, if it was me, I would have gone ‘slip slop slap’ and it’d be up already.

Not the IT monster.

The IT monster has taken the video recording and discarded the sound track because the interview was in a coffee shop with HORRIBLE sound due to background noise.  Past experience has taught me how HORRIBLE coffee shops are to sound, so I recorded with the camcorder AND my dictaphone using the microphone.  Instead of just slapping the two recordings (audio and visual) together, the IT monster took the audio recording, adjusted the volume whenever I spoke to increase the volume because I was quieter, being further away from the mike.  He then discovered that the MP4 and MP3 recordings are out of sync so he played around, adjusting the speed of the MP3 recording by milliseconds so that the sound stayed in better sync with the video…

Then, eventually, after working on this ALL EVENING Thursday and ALL DAY Saturday he FINALLY processed the interview, creating the MP4.

AFTER DINNER on Saturday I was FINALLY allowed to put up the interview I recorded on WEDNESDAY.

This, ladies and gentlemen, is the IT monster at work.

I’m wondering how many other people identify with the IT monster or his wife. 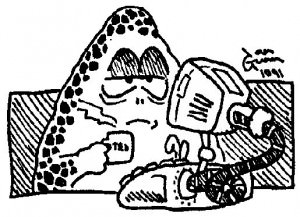