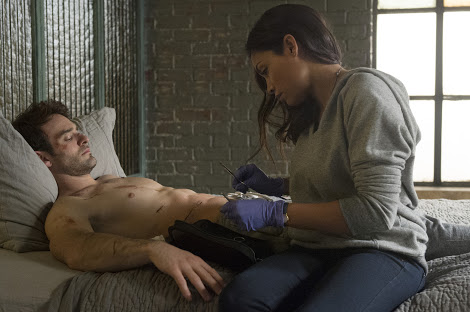 [This image isn’t catering for women or the masculine-attracted, no not at all. Excuse me while I get a towel. :-)_      — Editor]

Lawyer Matt Murdock (Cox) was blinded by a chemical spill as a child. By day he fights crime in the courtroom with partner Foggy Nelson (Henson) and their secretary Karen Page (Woll). By night he fights crime in the streets as a masked Daredevil, using his other heightened senses to see the world around him.

When the majority of crime in Murdock’s turf, Hell’s Kitchen, leads back to the mysterious Wilson Fisk (D’Onofrio) the masked man takes it upon himself to uncover Fisk’s plans. Will the Daredevil succeed or will he come crashing down to Earth?

Daredevil is to its 2003 predecessor what The Dark Knight trilogy is to Batman and Robin. A gritty and comic-book realistic reboot of a franchise that had become a joke within the comic community. I mention this because, to be honest, I was pretty dubious about this series when I first heard it was released.

I also feel I should mention that I don’t generally read Marvel comics so I have no point of reference other than the 2003 movie for the character or his mythos. I love the Marvel Cinematic Universe, but that’s where my Marvel fandom ends.

Charlie Cox was outstanding in his role. He brings the role to life and gives it real heart. The relationships between Foggy, Karen and Matt are well portrayed by all respective actors.

Wilson Fisk is a villain with layers that many just don’t have. Evil is as evil does usually but, with Wilson Fisk, you almost end up feeling pity. It is a remarkable thing for a writer, director and actor to pull off but, in this case, it has happened perfectly.

There are a considerable number of villains introduced in Daredevil. However, this doesn’t detract from the overall plot and it feels like everyone has their role to play in the overall plot.

The only issue I have with Daredevil is the often excruciatingly long fight scenes. While this is true of many superhero films, the fight scenes in Daredevil are often in the dark with low visibility and minor fights can go for several minutes each.

Daredevil is a great television addition to the Marvel Cinematic Universe. It is a must see for comic book fans, superhero lovers and action addicts alike.

‘Lawyer by day, vigilante by night. The hell does that work?’
‘Yeah, I’ll let you know when I figure it out.’