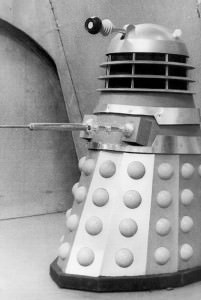 My earliest memories of science fiction are of hiding behind my uncle’s chair terrified, unable to take my eyes off the TV playing Doctor Who. When I was about 7 years old, I had to take the scraps out to the chooks at dusk after watching ‘Death to the Daleks’.  Terrified, I was sure there was a dalek behind every tree. The original daleks were silver and had really menacing theme music.

In the Doctor Who reboot the daleks had a change of image. The new daleks were sleeker, more well-finished, looking much cooler with their bronze or gunmetal casings, with new theme music and overall much less menacing. 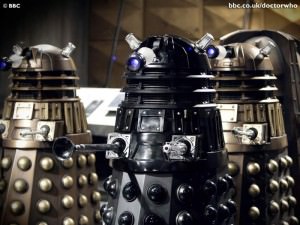 Finally the daleks were absolutely ruined for me in ‘Victory of the Daleks’, what is possibly the worst dalek story of all time (written by Mark Gatiss and script edited by Brian Minchin).

Spoiler alert!!! ‘Victory of the Daleks’ begins with the Doctor (Matt Smith) and Amy arriving in World War 2 at the request of Winston Churchill, to find daleks (called ironsides by the locals) fighting for Britain. The Doctor loses his temper with the daleks, hitting one on its dome with an oversized spanner. Not once did the Doctor hit the dalek weapon or try to take out the eyestalk. He yells ‘I am the Doctor! You are daleks!’ The daleks practically thank him for his testimony and leave?!?

The Doctor follows them and is informed that the daleks need his testimony to give to their progenitor, a dalek created from recovered DNA. Without the Doctor’s testimony, the existing daleks would not be recognised by the genetically restored dalek because they are too impure. With the Doctor’s testimony they will be recognised as daleks. So the Doctor wanders around without being shot while the daleks recreate their species in the form of 5 new daleks, each a unique colour and made of plastic. I kid you not – they look entirely plastic. The existing daleks then don’t mention the testimony they worked so hard to get from the Doctor, they just passively accept being shot by the new daleks. So now we have ‘new improved’ daleks that are suitable toys to accompany Happy Meals. These new daleks definitely look like they have been created with mass merchandising in mind, aiming at the ‘family entertainment’ aka kiddie market. 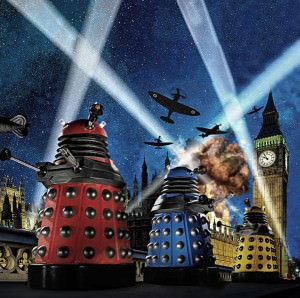 If you prefer your daleks not to be pretty colours of plastic, watch the below video where a dalek takes on a dog. This dalek is more threatening than the daleks in ‘Victory of the Daleks’.