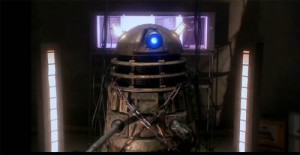 ‘Dalek’ opens with the Doctor (Eccleston) and Rose (Piper) arriving in an underground museum of alien artifacts located near Salt Lake City, Utah.

References to ’51’ abound, especially floor 51, because the BBC isn’t going to offend the US, now, is it? Just so we don’t miss the ’51’, the Doctor and Rose are taken up and down the elevator and stairs several times.

First some military-types arrest the Doctor and Rose, taking them upstairs to the boss Henry van Statten, a really obnoxious entrepreneur-type who acquires alien technology, develops it into human-compatible technology and sells it. Statten baits the Doctor with knowledge of a living alien incarcerated downstairs.

Taking the bait, the Doctor allows himself to be taken back downstairs to be locked inside a vault with the unknown alien whose signal the Doctor followed when travelling to this ‘museum’.

Just to clarify: the Doctor followed this signal WITHOUT IDENTIFYING IT and turns up completely unprepared. Even though there’s a cyberman head on display in the museum, the Doctor allowed himself to be locked up with this unknown living alien.

As the name of the episode indicates and the trailers leave the suspenseful moment completely spoiled, the unknown alien is a dalek.

Rose is sympathetic to the tortured alien creature, her innocence born of ignorance because the Doctor hasn’t told her anything about his nemesis or the Time War, of which the audience learns this episode. Rose’s innocence leads her to touch the dalek although the last person to touch a dalek was crispy-fried. Rose’s hand was burnt but she survived.

When fleeing from the dalek, Rose and her companions pause on the stair well, obviously aware that the dalek’s weapon is incapable of elevating sufficiently to target them, while laughing and boasting that the dalek would be foiled by the stairs. They couldn’t resist the old joke that was answered in ‘Remembrance of the Daleks’!

For most of the episode Rose is sympathetic to the dalek, at times even challenging the Doctor for his monstrous attitude. Even the dalek challenged the Doctor on his attitude! But in the final climax, Rose is challenged to instruct the dalek to self-destruct and she does so, casually, as if it’s an unimportant childish dare. Am disappoint!

‘Dalek’ is the second episode with foreshadowing of Bad Wolf, the first being ‘Aliens of London’. We still don’t know anything about Bad Wolf other than one reference may be an accident, two references are seeding a story arc.

In this season each episode is strongly linked to the previous story in an arc, giving a sense of time and place within the characters’ timelines although no narrative has been introduced other than hints of Bad Wolf. The budget – especially special effects – appears much larger than in Classic Who; the new series is certainly more shiny and modern.

Bluray images are usually clearer with more detail than the copy sent to Dark Matter for review.

The new series of Doctor Who is off to a glamorous start, racing through time and space to capture traditional fans and win the hearts of a whole new generation of viewers. The suspenseful moment – revealing the identity of the alien – was spoilt by the name of the episode and the spoilerific trailers. However, this episode’s fatality count coupled with revelations of the Doctor’s recent history with the daleks was fascinating. Highly recommended.