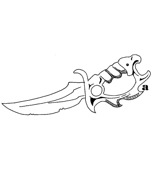 This illo is titled “fantasy2thumb13” but I have no idea why. To me it looks a little like a Klingon dagger but the blade needs more of those spikes on the handle. If it looks like any piece of anatomy, where the grip meets the wrist looks like a nose not a thumb. Can anyone explain this to me? There are SFF peeps out there who knew Ian back in the day.