Nimue runs away from home because most people in her village despise her, calling her cursed. However, her plan is foiled when she learns that the ship she planned to catch left days early. She returns home to find Red Paladins – think the corrupt Knights Templar – attacking her village and murdering her family. Thus begins this Merlin and King Arthur retelling.

I’ve been a fan of Merlin and King Arthur stories since I was in primary school so I compare every “Merlin” tale to those that came before and the legends themselves. Cursed falls in the middle of a large field of stories.

This story aims to be modestly feminist. It centers on Nimue, with Arthur assuming the role of a side-character and aid. The vast majority of stories based on these legends are unashamedly misogynistic. Women play minor roles including Nimue betraying Merlin, Guinevere “betraying” Arthur after failing to produce an heir, and Morgan, Arthur’s half-sister, seducing him to produce the villainous Mordred who ultimately defeats Arthur. Nimue as the central character and hero is refreshing although claims to a feminist portrayal are significantly undermined during the climax and denouement.

Cursed vs the legends

Kudos to any white writer who riffs of white legends instead of appropriating Samurai, Dreaming and other minority mythology. However, Wheeler appears to have written Cursed with minimal acknowledgement of the legends and without researching the era.

As Cursed unfolds, key characters appear from the legends. Many operate under pseudonyms then name themselves towards the end. Names are attached to characters will little or no resemblance to the legends. Arthur is not Uther’s son, he is Uther’s contemporary. Nor is Arthur Lord Hector or Ector’s ward, he is a contemporary running around aggravating Ector. And so it goes on. Time and time again I wished that Wheeler chose to write a unique story rather than force this square peg into a round hole.

Cursed is somewhere on the spectrum between the best and worst Merlin-Arthur story I’ve ever read. Mary Stewart’s Crystal Cave series diverged from the legends but strove for a balance between consistency and a unique and plausible story. The Mists of Avalon endeavored to be feminist while absolving an older woman for her participation in the rape of a younger woman, written by an author who was, apparently, living in a not dissimilar situation. But the worst ever Merlin story I’ve ever read was a science fiction version that is indelibly imprinted upon my mind although I read it at the ripe old age of 18. I was disgusted with the story even then.

Cursed’s prose is of a standard and style that, quite frequently, you’d expect of an author writing for a artist to convert the story to a graphic novel or as a guide for conversion to a TV series. Descriptions are not the best nor is the narrative the most immersive I’ve read. However, it’s consistent: Wheeler’s storytelling is far superior to some books… like the story where everyone had a Harry Potter scar from surgery removing their amygdala through their frontal lobe… and one scene was outside then inside then they walked through the front door from the outside to go inside. (Seriously, did no one proof read that book?) Cursed is far superior!

King Arthur lived sometime around the fifth century of the Common Era, in a post-Roman Britain with roads, aqueducts etc. I expect the Netflix series will have lots of muddy tracks without any Roman roads.

The historical inaccuracy that specifically made me smile was the specific mention of steel-toed boots in an era that, I believe, did not have steel let alone steel-toed boots. Cursed is a comic-book style story riffing off old legends without any historical accuracy. That’s ok: judge a story on what it sets out to be.

One other point: it appeared that France is part of Britain or connects to Britain without the Channel separating them. I could be wrong and the France-type area could be an artifact of Saxon and Norman invasion. It’s been a hot minute since I studied British history so I’ve forgotten exactly when the invasion waves occurred.

In short, Cursed is a fantasy story better set in an alternate world than attached to Merlin; it works better apart from the legends. However, it works as story. Mostly.

Disability is where Cursed really falls down badly. Every single portrayal of disability is deeply offensive. From the lepers whose condition is utterly devoid of research, instead using “leprosy” for comic horror effect, to the underground Fey race. The narrative describes the latter as “deformed”, which is the equivalent of describing a dog as “deformed” for walking on four legs.

Sister Iris is a Right Wing Nut Job and N@zi, hell bent on murdering everyone who is different. So she gets burnt in her own fire. Her disfigurement then symbolizes her increasingly warped personality and murderous heart.

Hell, even the evil murderous Pope has bad breath.

How about some nuanced writing, instead of using tired tropes as metaphors? Sheesh.

Apart from the (all too realistic) trope of men at war based on “racial” groupings out for wealth, Cursed the book offers a twist regarding race. I think Miller’s line drawings depict Arthur and Nimue as black because they seem to have broad-ish noses along with full lips. After visiting the World History in 100 Objects exhibition, I’m totally ok with that. It’s actually feasible.

Furthermore, the violence and attempted eugenics perpetrated by the Red Paladins definitely works as a metaphor for white supremacy. The Fey rising up in an attempt to flee and survive also works as an analogy for #BlackLivesMatter. When will bigots learn that if we accept one another and become one glorious multicultural community, no one will need to protest or flee or act in self-defense in fear of their lives?

Judge a book for what it sets out to achieve, is my philosophy. Cursed sets out to reboot Merlin and King Arthur legends for a comic book style story intended for a visual media like graphic novels and television. The author, Thomas Wheeler, has written for the screen before, usually getting above 5 but less than 7 on IMDB but, notably, getting over 7 on a few occasions. Cursed the TV series hasn’t been reviewed yet and doesn’t have ratings on IMDB or Rotten Tomatoes.

The book has its strengths and weaknesses. It’s not historically accurate. A blindfolded person appears to have named characters by sticking a pin in a chart. However, the story is pretty enjoyable if you take it as a slightly feminist reboot intended as comic-book style light entertainment. It’s a shame Wheeler’s depiction of disability reinforces stigma throughout. I give Cursed the book 3 out of 5 stars. 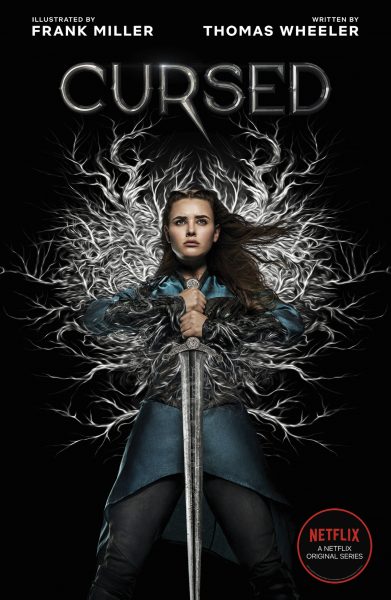