Jason Franks, Nalini Haynes, N K Jemisin, Stephanie Lai and David Witteveen as moderator discussed “How should you approach the portrayal of cultures other than your own? What should be avoided? Who does it well?”

I’m not sure that we actually answered the questions. It was more a discussion of specific examples of problems. First off, David asked us why we like the multiculturalism of science fiction.

Stephanie talked about being one of three people who are writing Malaysian steampunk at this point in time. Nora talked about writing a black person as a sun character and a white person as a moon character – I totally agree with that; it’s much safer for me to walk outside at night due to sunburn (not safe regarding human threats, obviously). I prompted Nora to share about Air New Zealand, a public airline with double standards:

[the airline] has used tattooed All Blacks and singer Gin Wigmore in its advertising, while koru – a stylised NZ fern – are used in its logo

So the airline uses Maori culture to promote itself while leaving Maoris unemployed for having ta moko (Maori cultural tattoos).

Raceface promptly rose to the surface, as did the balancing act between a concern for cultural misappropriation and needing white people – including straight white men – to write about characters that are different in order to build diversity in the genre.

Fairly shortly after that, Stephanie led the way with a rant about Windup Girl and how it is culturally disrespectful. After Steph wound down, I said I loved Windup Girl. I went on to explain that Emiko is disabled, that there are so few disabled people in science fiction and fantasy, that Emiko’s experience of being controlled by others, disempowered and abused is quite common for people with disabilities, especially women with disabilities. I also pointed out that Emiko was not fixed during the novel.

Steph and Nora argued that if most people do not read Emiko as disabled then people with disabilities are still invisible; I’m curious as to whether any other persons with disabilities interpreted Windup Girl the way I did?

I argued that when you have nothing, you accept the crumbs from the table; Windup Girl is a comparative feast.

The conversation moved back to discussions of race, engaging with the audience, answering questions. The summary included everyone on the panel making one or two brief points about what to watch out for when writing other cultures. Research was a definite key cited by Nora and confirmed by everyone. I said something about consulting with the relevant people group: for example, if you’re going to write Indigenous Australians, consult with the particular people group you’re writing about.

I added that if you’re going to write an albino villain who is insane I will hunt you down.

Two people came up to me afterwards assuring me that THEIR albino villains will be intelligent. I’m sure they thought they were funny, but seriously? Would you make short jokes at Peter Dinklage? I guess some people would.

For more information: depictions of albinos in popular culture on Wikipedia, the Evil Albino on TV Tropes says lots of good stuff including “The treatment of albinism in fiction is often startlingly harsh…What is worse is that albinism in and of itself is treated as a distingushing mark of evil…”

OMG TV Tropes actually says “in the west… it is possible to be Too White.”

I think I’m going to cry; this is the first time I’ve heard of a non-albino and non-worker/carer for albinos ever saying this. I’ve tried explaining this to people but I get blank looks and, at times, willful misunderstanding. 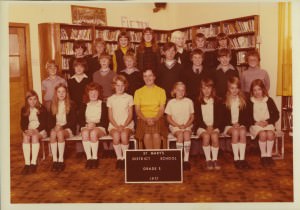 One of these things is not like the others…

I was ten when this photo was taken; a good year younger than my classmates because I started school early so I could fail a few years and still hopefully finish high school (that was the extent of disability access in the 1970s). I looked different, I was younger, shorter (they had to get me an extra-high stool to stand on) and I was blind as a bat. I hated being too white.

I’d like to discuss this: do you have any pet peeves about cultural misappropriation? Do you want to see more straight white guys writing more diverse characters? Let’s fix the world’s problems before dinner.