Doctor Archibald Shaw arrives in India as a young man in 1878 during the British occupation. He’s assigned to an outpost that appears quite pointless unless the local Raj intends them to be sacrifices. The doctor Shaw is replacing died, allegedly of suicide. However, that doctor was too afraid to even look out windows at night let alone manage a walk to a clifftop to jump off. And then there’s the idol that his friend obsesses over. The idol is the symbol of cults of death and madness…

In the original, Shaw takes an orphan under his wing. Questions arise about the “great white savior” nature of this relationship. Haas says:

Cults of Death and Madness is a prequel to my novelette Damned Voyage which appeared in Writers of the Future volume 35. One reader of that story suggested I was guilty of giving in to the “great white savior” character where Shaw and Singh’s relationship was concerned. I have done my best to address that in this prequel while still keeping the elements of racism and white privilege from that time period historically accurate. To this end I have had friends of Indian background review the story and provide feedback. In the end it is up to you, the reader, to say if it’s been handled well.

Haas emphasizes that Shaw learns from Singh in an attempt to overcome the savior complex. However, the racism embedded in this story is as insidious as Cthulu and Lovecraft himself.

The British army is intent on stomping out the Thuggee cult where, according to Haas, victims were strangled to death as an act of worship. Wikipedia says:

Thuggee refers to the acts of the Thugs, who were organized gangs of professional robbers and murderers. The English word thug traces its roots to the Hindi (ṭhag), which means ‘swindler’ or ‘deceiver’…

Contemporary scholarship is increasingly skeptical of the thuggee concept, and has questioned the existence of such a phenomenon, which has led historians to describe thuggee as the invention of the British colonial regime.

Haas takes this probably racist “thuggee” idea and melds it with Hindu beliefs. In Cults of Death and Madness, Thuggees try to either resurrect their goddess who will end the world or they try to placate her, to keep her asleep. Both are sacrificing humans to achieve their ends.

However, Haas’s Hindu goddess is depicted as a front for Lovecraft’s Cthulu. A British horror writer’s invention overwrites a Hindu goddess.

If you’re a regular horror reader, you’re probably more familiar with expected tropes and plots than me. Cults of Death and Madness more or less proceeds as expected, building to a climax, for most of the prequel. Then Shaw and Singh set out on a journey.

And suddenly it’s a few decades later. Their save-the-world mission was carried out. We don’t learn what happened other than a really basic outcome that sets the stage for this portion of their story.

Shaw is a changed man. No longer worried about accidentally killing a man, this former doctor is a ruthless ends-justifies-convenience killer. He’s also, apparently, the Ripper. But it was “justified”. Apparently.

Without substantial story telling in the missing decades, this later section feels like it’s someone else’s story. A significant disconnect occurs.

There is an ending. I guess it’s as satisfying as horror stories can be.

Bechdel Test? What Bechdel Test? In this story, we hardly meet any women. Shaw’s mother is background for Shaw’s character: he writes to her, even after her death. Wives have conjugal visits “to make heirs”. And childish men snigger. But we don’t meet them either. Some of the Indians Shaw helps were probably women I guess.

Shaw gains entry onto a ship by walking alongside an elderly woman, whose name we learn. But she’s just a cardboard cutout, a “because plot” device. There aren’t any women of significance so it’s impossible for two women with names to have a conversation. Period.

Cults of Death and Madness starts out as a good horror story although it has no women to speak of and its underpinnings are quite racist. This story might not be a del Toro’s Hollow Ones, but, other than the previously mentioned issues, it’s solid storytelling with character work. Then, instead of the climax I expected, we jump decades in time. Now characters are significantly different. The disconnect is strong with this one. A note at the end of the book says Haas is busy working on more Shaw and Singh stories so, perhaps, Haas is currently writing the conclusion missing here. 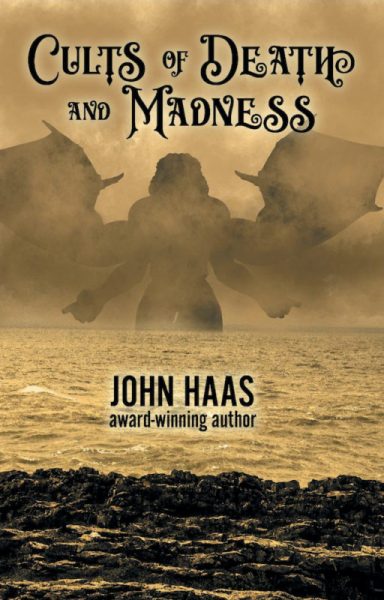