Clio lives in ancient Crete (I am geographically ignorant) on a Mediterranean island with her family. When returning from checking on her horse – who is about to foal – Clio sees raiders practicing maneuvers in the bay. She runs into town as fast as she can using her crutch to warn everyone. (No, this isn’t the cuckoo’s flight. That comes later.)

The Lady – a cross between a queen and high priestess – decrees that a girl must be sacrificed to the goddess to protect the village. Clio is overjoyed at the thought of being selected and no longer experiencing pain from her acquired disability. She is also terrified of having her throat cut and dying. There is so much more life to live.

Never does it cross Clio’s mind that she might not be eligible for selection because she is not perfect. This is a testament to the relatively inclusive society in which she lives. Also, Orr has done her research: ancient gods required perfect sacrifices.

Let’s just say that, between preparing for war and the sacrifice, Clio’s life gets complicated.

Cuckoo’s Flight in a hierarchical society

Orr researched ancient Mesopotamia thoroughly and built her society accordingly. Thus this island community is hierarchical. There are slaves. Clio’s grandmother – Swallow’s Dance’s central character – was once a slave but was freed. Even now, in her retirement, she insists that slaves visiting their business are treated like free citizens. Her family must offer them food and drink and treat them as equals. Grandmother’s legacy includes procuring and freeing slaves when she could. So slavery is a feature of Cuckoo’s Flight but the characters question the legitimacy and consequences of slavery.

This society is all Mediterranean so it’s probable that we’d consider the entire cast to be “not white”. The differences within this story appear to be more class-based than racial, although the raiders are “other”. Whether that “other” is due to job description or race is unclear. Heh heh.

Clio’s town is the “Capitol” of the island, with the palace. Surrounding villages are “other” because they appear to be lower class fisher folk. However, with the threatened raid, it appears they are the same people, they’re “just” considered lesser citizens and untrustworthy.

Malka is an orphaned girl from the fisher village. She watches Clio with the horses and desperately wants to ride and become part of that community. Although Clio is the central character, Malka is the titular cuckoo. When Clio feels stabs of jealousy because Malka can ride while Clio’s disability means she can’t ride any more, Clio reflects that even swallows (a reference to Swallow’s Dance) rejoice when their cuckoo chicks learn to fly.

Clio’s acquired disability and loss of things she loved is not recent. However, like anyone feeling ongoing losses, Clio’s grief is ongoing. She wrestles with herself while acknowledging her grief and loss and pain. I love Clio’s grief.

Although I have never had good eyesight, I grieve for what could have been. Additionally, my eyesight is getting worse so I grieve for what I’ve lost. I also grieve for the pain I experience struggling to cope with what little vision I have left. Despite Cuckoo’s Flight being a children’s book and suitable for children, I related to Clio’s story and grief.

Cuckoo’s Flight is, on the surface, deceptively simple with underlying complexity creating an engaging story with appeal to a wide range of readers. Don’t dismiss this as “just a children’s book”! I highly recommend Cuckoo’s Flight to you regardless of age. However, I also recommend this book especially to children, to people who love historical fiction, to readers who need a palate-cleanser from harrowing reads and an escape from the Terrible Twenties.

The publisher has even provided TEACHER’S NOTES on the book’s page.

Read this if you enjoyed Dragonfly Song. I interviewed Wendy Orr a few years ago; that interview is available here in podcast format and on all good podcasting platforms. Also I plan to interview Wendy as one of my International Women’s Day panelists. Stay tuned! 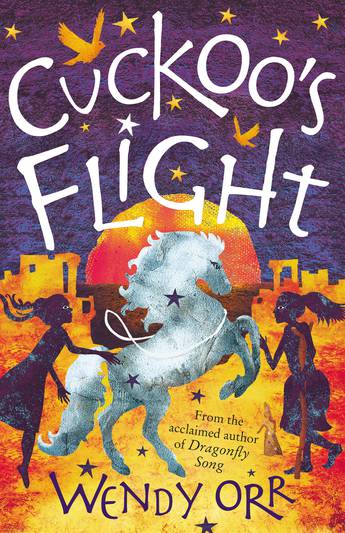