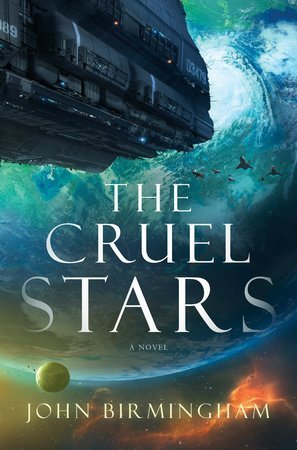 Lieutenant Hardy is waiting among the cruel stars while she looks at her reflection, worrying about her off-the-rack dress uniform that does not fit properly. She’s met by a man of slightly lower rank whose motormouth promptly informs her that he’s from a wealthy but not noble family. Then they run into a ‘speaker [who] made an extra-special effort to cover everything in gold leaf’, that gold-leaf being to emphasis his accent that indicates he grew up at the royal court on the Armadalen homeworld. Thus, by page 7, JB has established social issues and set the stage for class-based conflict.

A child princess resents being taught things the old way, by repetition. She wants to just upload data like everyone else. However, uploading data instead of genuinely learning skills has its downside, as her not-quite-beloved betrothed learns when he visits McLennan, a Scotty from Star Trek archetype ramped up to an MA rating.

The Liberator is a Nazi/Sturm ship whereas the crew of another ship are more like Blake’s 7.

Coto is a large grey mutant with a personality like Drax from Guardians of the Galaxy but, instead of red tattoos, he has a rhino horn. He’s just as adorable as Drax although he’s a mechanic and computer geek between bouts of kicking ass.

The first 50 or so pages introduce different characters spread across the impending field of conflict. The story almost feels like an anthology set in the one universe. However, after introducing a cast significantly smaller than Game of Thrones, the threads intertwine, bringing the vastness of the universe into one cohesive tapestry.

With lots of splodeys, blood and gore. And endless pop culture references.

The short version: The Cruel Stars is a space opera that is so much my jam that it could have been written just for me. I’m giving it 5 stars. If you want more of my thoughts on the novel, read on. Otherwise, just read The Cruel Stars.

The Cruel Stars and gender

Characters are introduced as male or female, floating intellects as male-voiced or female-voiced, until page 13. Then a sublieutenant is described as being “in transition from male to female according to the discreet purple pip on her collar tab” (p. 13). I wouldn’t notice such an identifier but, for the majority, this may be helpful in the real world. Voluntary use of an identifier to communicate gender where gender may be ambiguous resolves issues. Raising trans issues in such a factual manner is inclusive. However, there is no mention of whether pips are mandatory, optional or if everyone wears a colour-coded gender identifier pip. And gender is never really discussed again: Birmingham indicates that his universe is diverse and it seems even the Nazis aren’t concerned about gender issues.

The Cruel Stars and its place in speculative fiction

JB has a long love affair with speculative fiction as is evidenced by the interstellar-capable warship Defiant being called Defiant (DS9 anyone?) plus it folds space to travel and it is BIGGER ON THE INSIDE (p. 15).

Je Ne Regrette Rien is the name of a ship, a reference to a song and it literally means “I regret nothing”, a meme that lept into the zeitgeist from a Simpsons episode. The meme refers to embarrassing or stupid actions that the speaker does not regret because they were, presumably, fun. The crew of the Regret (the shortened name of the ship), have no backups to enable re-embodiment in the event of their deaths. This fact coupled with their introduction to the reader mid-gunfire and alcohol-fire fight with the Yakuza presumably explains the name of the ship. Plus the captain and her lover can’t keep their hands off each other, not even during a gun fight.

This novel is FULL of references to other books, TV and movies, and in the best possible way.

The Cruel Stars and eugenics

This novel is about the inevitable war between Nazis that hid on the moon (not literally) and the rest of humankind. The Sturm are purists who oppose mutations, cybernetic implants and ‘re-life-ing’ (transferring consciousness after a body’s death). The Sturm are returning. They plan to kill all mutants and borgs (most of humanity except the poor who couldn’t afford augmentation). But the Sturm know this will be a process.

The Nazis ‘only’ murdered hundreds of thousands of disabled Germans, millions of Jews and other ‘lesser’ people. The Sturm plan to murder billions upon billions. Like the Nazis, the Sturm are organised. There is the Great Machine of Nazi/Sturm efficiency that begins with planning. Even before the Sturm have taken any planets, they have meetings to plan the murders. They also use Orwellian-speak to communicate ideas and spin violence as a virtue.

The Cruel Stars vs zero-G combat

Hand-to-hand combat scenes set in zero-G that were so well written that I started wondering why troops or mechanicals in this and other zero-G battles don’t anchor corpses and debris as they advance. There is too much risk of a soldier being startled, missing a not-quite-dead corpse because everything is moving, etc. I guess this isn’t quite the first time I’ve thought about this but Birmingham’s zero-G battle gave me time to ponder this trope.

Also, if you’re too faint of heart for floating corpses and pieces of corpses, this may not be ‘your’ read.

In the interests of full disclosure: John Birmingham personally gave me a gorgeous hardcover copy of The Cruel Stars. He’s featured on Dark Matter Zine before, in reviews and blogs, as well as being a guest on a panel. However, we’re not friends in the personal sense.

I was a fan of JB’s work long before I ever thought I’d meet the mind that spawned World War 2.0, which has since become the Axis of Time trilogy. Although not perfect, I loved this trilogy that features a near-future Allies fleet doing a “Philadelphia Experiment” and ending up in the middle of World War 2 with 21st century weaponry, morals and personal issues.

I’ve delayed writing this review because I’ve been concerned. How do I give the novel 5 stars after doing the promo video and still retain credibility? How do I justify not giving The Cruel Stars 5 stars? Screw it. If you don’t like my reviews, don’t read ’em. John Birmingham talks about his book here, if you have any doubts about your inclination to read this book. It’s a short, high-energy video that displays his sense of humour and connection to pop culture, both of which come through in the novel.

I dont care how much money Steven Spielberg is offering. Unless Frazer McLennan is placed by Peter Capaldi this movie is just not fecking happening…