Margaret Cook contributed to the Authors For Fireys fundraiser in January 2020. This mammoth undertaking was organised by Emily Gale and Nova Wheetman. They raised $513,149 to support firefighters and to help Australia’s bushfire survivors.

Queensland was hit by fires last year and people rallied to help, as they did in the 2011 Brisbane floods. As I watched the tragedy of the bushfires unfold in the southern states, I wanted to pay this generosity forward. Thanks to @EmilyGale and @NovaWeetman for this fabulous initiative and to @MoriartyCass for co-ordinating Brisbane authors.

My auction item for #AuthorsforFireys is my book A River with a City Problem: A History of Brisbane Floods (UQP 2019). At first, I was tentative to offer a book about floods during fires, it seemed ironic, but the issues behind floods and fires have a lot in common. I also work as an academic historian in the disasters space and currently co-editing a book with Scott McKinnon about bushfires, cyclones, floods and earthquakes so I have been following the bushfires very closely.

I am a novice card maker but I made the pictured card. This is a thank you to Margaret Cook for appearing as a guest on Dark Matter Zine and for supporting Australia’s firefighters. 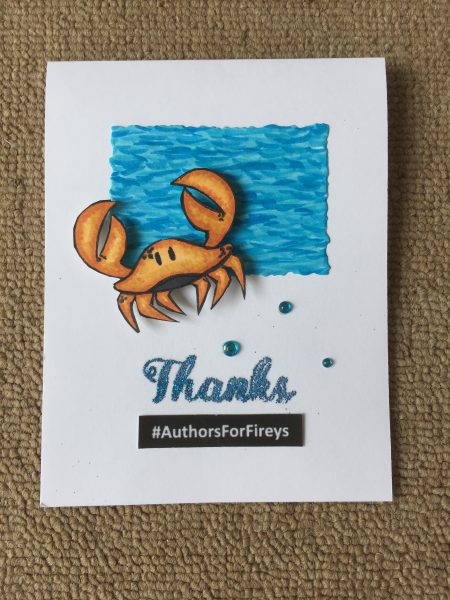 I stamped, cut out by hand and colored this crab last year. It then ended up in my ‘save for later’ stash, woefully neglected. One could argue that this crab’s life story is a metaphor for how Australians treat our rivers, our environment.

Recently (ish) I pulled out some folders and rediscovered the mountains of items I’ve put away ‘for later’. I decided it’s time to use them so I set myself a challenge of creating cards that use up these items. Other similar cards include the ‘Whale of a Time’ for Elizabeth Knox. Although simple, I am quite proud of the pun and I like the card. I cringe at what others might think but, dammit! I’m following my joy.

Anyhoo, this crab needed either a beach or some water. I decided to try to emulate Kelly Latevola’s water in this image. Yeah, I know I suck. But I’m having a go. And learning to make cards and learning to play. 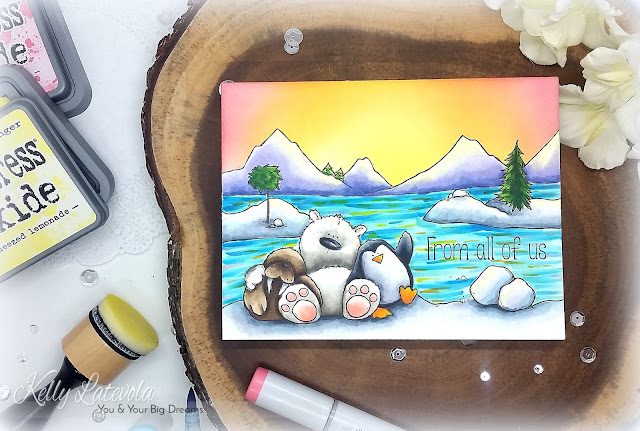 And, looking at it again, I don’t think I got all the right colors. I knew I was missing one but I think I must have mixed up a few because mine is just too plain a blue. Live and learn, amiright?

I stamped and embossed the sentiment. Forgetting to use the anti-static tool caused embossing powder to stuck where it wasn’t wanted. And, just to be consistent, it did NOT stick where it was wanted. I gave it a second go but it still didn’t turn out well. Part of the problem is, I think, that I pressed down too hard on the stamp. I suspect the women who do stamping and talk in their videos about ‘giving good pressure’ are not 6 foot tall amazons who do downward-facing dog, plank and cobra on a regular basis. So I have to learn what is ‘good’ pressure, as opposed to ‘EXCESSIVE’.

As a final touch I glued a few dots and an ‘authors for fireys’ sentiment as well.

This is not my finest work to date. It seems like whenever I venture out and do something new, the end result is… less than what came before. Still, I resolved not to throw away any more cards. And I’m learning. It’s the thought that counts, right? RIGHT?

I had a plan for Margaret Cook’s card, an individual plan. But in the end I realised that trying to make TAILORED cards for every Authors for Fireys author would keep me here until Christmas. I’ve invited Margaret back for a future guest appearance so I’ll use that idea then. And, hopefully, I will have learnt enough to improve the execution by then.

“Giving up is the only sure way to fail.” – Gena Showalter. So don’t give up. Follow your heart, do what makes you happy even if it makes a mess, try, try, and try again. Like the Triantiwontigongolope.

Have a great week,