A long time ago, a galaxy far, far away came to Melbourne Scienceworks. (Cue Star Wars theme music.) April Staines and some friends decided to go to the opening night, and even dressed up. They put together some costumes, April going as an X wing pilot. At the opening night April met people from the 501st Legion and Rebel Legion, connecting with like minded people who encouraged her to join up, helping her to take her cosplay to the next level.

I attended my first ever Armageddon in 2009, after attending the Melbourne Scienceworks Star Wars exhibition, which I found to be absolutely stunning. At one point at Armageddon I was wandering around and saw R2D2 heading somewhere quite purposefully. Somewhat excited at R2’s intense manner, I set off in hot pursuit. Much to my amazement and triumph, my pursuit paid off! I discovered a lot of people in costumes gathering for photo opportunities. These people were in movie standard costumes, so I had no idea whether they were sponsored by Lucas and the Scienceworks, or what the story was. There didn’t seem to be many people out of costume around so, fearful that I may be told to leave, I didn’t ask any questions or talk to anyone. I figured if I tried to look like I belonged I wouldn’t be evicted.

At one stage there was a bearded person who looked very familiar, standing less than an arm’s length away from me. I racked my brains trying to work out how I knew him, then, just as he was called over to pose in the midst of the cosplayers, it struck me – it was Seth Green! But he was SO SHORT! I swear, he comes up to about my shoulder! I never would have guessed from watching Buffy, although I guess he was somewhat short in The Best Man. Hilarious, but short. 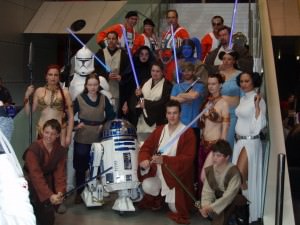 I also saw, and photographed, this woman dressed as a Twi’lek, with whose costume I was most impressed. This was April, although I didn’t know this for nearly a year. The rest of the Star Wars displays at Armageddon were well worth seeing, and were among my favourite aspects of Armageddon 2009. 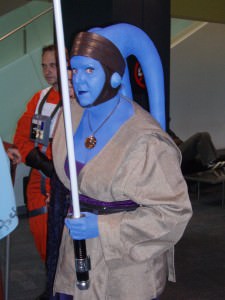 In May 2010, the Melbourne Science Fiction Club (MSFC) held a minicon with a vampire theme in a church hall. Lo and behold, who should show up, but April dressed as a storm trooper. (The costume theme was very flexible, all costumes were welcomed.) Apparently the quizmaster reached the question ‘Which movie is currently celebrating its 30th anniversary?’ just as April emerged from the change room  On this occasion I wasn’t concerned about being evicted as an unauthorised person, so I did chat to April a little, for the first time.

Months later I put a number of photos on facebook, on the MSFC facebook page. A while after that I received tag requests from April, wanting to tag herself. I hadn’t remembered her name, so I gave permission then thanked her for tagging the photos. We became friends on facebook, then I think that led to April tagging herself from Armageddon 2009.

In October 2010 I published the first issue of Dark Matter. April received a copy of the first issue, and suggested that I might be interested in including anime and cosplay to diversify the content. I was enthusiastic, as anime is an interest of mine already but I had no idea of the culture of cosplay here in Melbourne. I had never heard of the 501st or Rebel Legions, which is why I hadn’t even approached them about advertising in Dark Matter.

April suggested I dress up in a costume she would lend me for Armageddon 2010. I was to dress as a Rebel pilot. When I arrived on the day, I discovered April dressing Astrid, a cosplayer from Adelaide who was dressing up as a Twi’lek. April was wearing a new costume, Fire Nation from Avatar. These photos give a hint of how much effort goes into just getting into the Twi’lek costume – first the makeup, then a hairnet so the headpiece can then be strapped on. Not to mention the layers of jedi clothing that need to be carefully arranged before being held together with the elaborate belt. 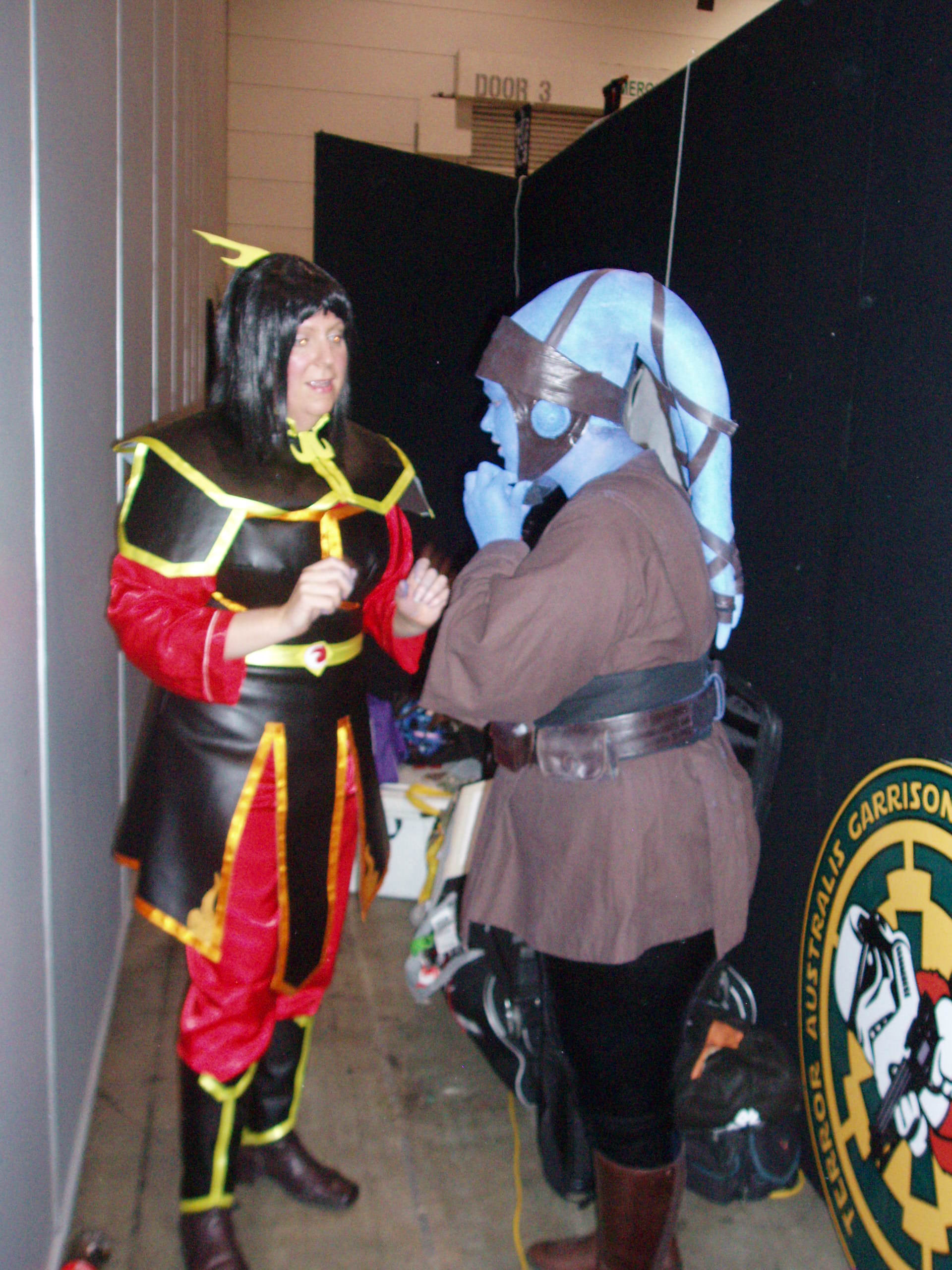 I dressed up as a pilot, which takes concentration and care to get everything in the right order. Then I emerged from behind the 501st Legion’s blast doors that serve as backdrop and privacy wall for a change room  I had a blast, being asked to pose for photos, being ‘throttled’ by Darth Vader, wandering around and experiencing the difference wearing a costume makes. Strangers at Armageddon respond completely differently to people wearing costumes; it’s like we have a common bond even if they’re not in costume.

Astrid was so enthusiastic, she went straight back to Adelaide and assembled her own Twi’lek costume, which features heavily in her photos on her facebook page. I have plans but I’m a bit slower to follow through.

I enjoyed myself so much at Armageddon with the 501st and Rebel Legions, that hubby and I bought tickets to the Star Wars Charity Gala Dinner that Sunday for the following Saturday. I was sorry we couldn’t get costumes together in the week in between, but we settled for going formal instead. See the separate article about the dinner (Photo from the dinner, not sure who took this one, but April is the Twi’lek dressed in white). 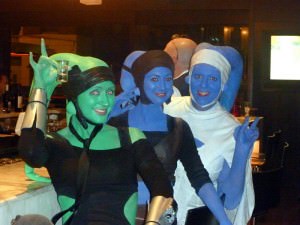 April once again stepped in, increasing my enthusiasm about cosplay. April emailed me, asking if I’d be interested in joining in with a tap dancing troupe’s Star Wars number. At first I almost freaked out, thinking I can’t dance, I’ll be a catastrophe, but I was also curious. Well, curiosity didn’t kill this cat, not yet anyway.

Glamour Puss Studios had an end of year performance featuring Killer Queens by Queen, and a troupe of tap dancing space queens with light sabers. The idea – they wanted a jedi and some storm troopers and Darth Vader to have a battle, then to stand behind the dancing troupe during their dance. We were also included in the finale, walking on escorting the MC. April was a Twi’lek jedi, and needed some storm troopers. I was one, and hubby decided he’d join in and be the other. We had an absolute ball! 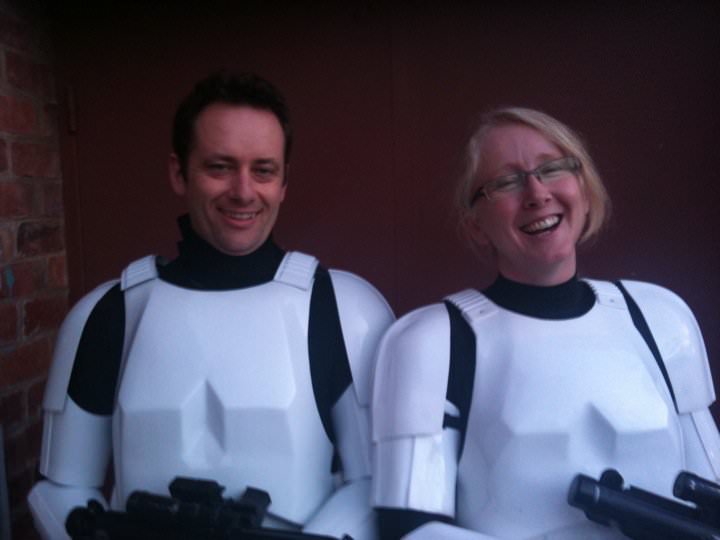 Edward and Nalini as stormtroopers

After this, Edward and I talked about costumes and joining the Legions. At first Edward could only think about being a storm trooper, but then April said they didn’t have enough Darth Vaders. Edward had assumed they’d have a queue of Vaders, so much so there’d be no room for more. Now he has his heart set on being Vader.

I’ve been following the antics of the Legions and April on Facebook. They’ve been in at least 2 parades since Armageddon, including the Myer Christmas Pagaent, as well as organising the dinner.

April is an enthusiastic cosplayer whose enthusiasm is contagious. April is a member of the 501st and Rebel Legions, with authorised Star Wars costumes including the storm trooper, rebel pilot, twi’lek jedi and Leia (from A New Hope). April is quite adventurous in her costuming, expanding into other universes. Her other costumes include Fire Nation from Avatar and Marilyn Munroe from Gentlemen Prefer Blondes. Since talking to April last, she has another brand new costume, Hello Kitty!

April’s son Lachlan has a few costumes as well, including his own Fire Nation costume and a Star Wars bounty hunter.

The 501st and Rebel Legions are a real family affair. They’ve even started a new group for under 18s to cater for the kids, called the Galactic Academy. Although the requirements for adult costumes are quite strict for approval and official membership, the requirements for children are much less so. The little Vader in the below photo was 6 years old and wearing a ‘pyjama’ Darth Vader costume, which is acceptable for the Academy.

I hope in future issues of Dark Matter to follow the adventures of the 501st and Rebel Legions as well as the Galactic Academy. I also hope that other clubs will write in letting me know of your existence and your adventures.

This article was previously published in Dark Matter issue 2, January 2011, and predated on this website to reflect the original publication date.