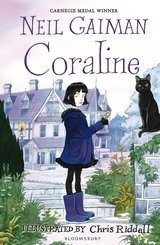 Coraline has been re-released in a tenth anniversary edition.  Although written by Neil Gaiman, this is a word novel (if that’s a thing) as opposed to a graphic novel, although Coraline is available in graphic novel format.

I originally read this novel maybe six or eight years ago, having borrowed it from a library.  It had a murky brown cover that was definitely not appealing; the new book design is far more attractive.  This 10th anniversary edition has a new introduction by Neil Gaiman, describing the process of writing this novel for his daughters, talking about the movie and the new illustrations in this new edition.  If you have an original edition, I’d recommend purchasing this edition to include in your collection just for the introduction and the new illustrations, not to mention the cover.

Chris Riddell has beautifully interpreted Neil’s story with pen and ink drawings predominantly using lines, only occasionally using blocks of black.  These drawings may appear simple and yet, on closer examination, they are quite complex and detailed.  The use of flowing lines to emphasise the tendrilled threat of the ‘other mother’ is appropriately menacing and yet appealing visually.

The story of Coraline is already a classic.  Coraline is a girl, probably in primary school, definitely small for her age and somewhat precocious.  Feeling ignored by her parents and bored, Coraline explores the house and grounds before opening a door into a parallel world where she meets alternate versions of her parents and the other residents of their shared building.  After her initial temptation to abandon the real world in favour of an alternate reality where Coraline would – allegedly – be the centre of attention with everything she could want, Coraline is both attracted to and repulsed by these alternate versions of the adults in her world.  Coraline learns the meaning of bravery as she resists temptation, looking for her real parents.

This story is told in simple verbal brush strokes with descriptions added sparingly.  We learn more about Coraline’s parents from the comparative description of the ‘other parents’ than from our initial introduction to her real parents. Gaiman’s quirkiness is evident in lines such as ‘… a rock that looked just like a frog, and a toad that looked just like a rock.’  The use of language is elegantly simple although it may stretch some younger readers occasionally.

While Coraline is a horror story, it is a gentle story for children who like scary stories but need a sense of safety, building a world-view where the world has dangers that can be overcome.  Like the quote Gaiman uses to open the story, ‘Fairy tales are more than true: not because they tell us that dragons exist, but because they tell us that dragons can be beaten,’ by G.K. Chesterton.  May there be many more fairy tales like this one.

Highly recommended for readers of all ages.