Photos of the book launches, art and more are at the bottom of the page.

Sunday at Continuum 9 started late for me, with the 11am Genderbending panel.

This panel featured Lucy Baker, Liz Barr and Rachel Holkner discussing “Rule 63: For any given male character, there is a female version. And usually, fandom itself has created her. We take a look at depictions and subversions of gender and femininity in rule 63 fanworks!”

Discussion started with a power point presentation showing male and female versions of the character of choice for each panelist, before launching into boob armour [insert bad joke here] to Iron Maiden’s ponytail coming out of the Iron Man helmet. Inevitably the discussion ranged through issues like performative aspects of gender and the practicality – or impracticality – of costumes for their purpose.

Boob armour pisses other people off too, not just me. YAY!

This was conducted largely as a workshop on writing fantasy, working through the traditional 12 points of writing fantasy. I’m sure some of the fantasy stories workshopped during this time were hilarious, but I left early to prepare for Richard Harland’s book launch. If anyone wanted to hear Paul speak about his career in publishing, he was eloquent on the subject when I interviewed him prior to Continuum.

After the Maskobolo, the foyer was decorated with sketches of cosplayers.

Two book launches took place on Sunday. The first was Richard Harland’s Song of the Slums. Later Tali Helene launched Jason Nahrung’s Blood and Dust and Kirstyn McDermott’s Caution: Contains Small Parts. There will be videos of speeches and readings up soon.

Kirstyn’s blog about the launch is here.

In between launches Nora signed a stack of novels for me and we chatted while Trudi Canavan, multi-tasking, talked while sketching a landscape on a name plate. After Trudi left the room Nora spotted the drawing, much to Nora’s delight. I think Nora was going to try to keep it, so I hope she managed to protect it from erasure in some way.

This panel featured m1k3y, PRK  and Julia Svaganovic discussing the topic: “Sons of Anarchy has been compared to Hamlet and Dynasty, how did a show about a gang of brutally violent outlaw bikies become so popular?”

Although not many people showed for this panel, discussion was energetic with the audience participating [shifty eyes]. There was a bit of talk about season 5, which Edward and I haven’t seen yet. PRK said he anticipates not being able to finish the series, or at least needing a break from it, because it’s going into very dark places.

The parallels to Hamlet were touched upon but generally skirted around as they could be spoilers. Comparisons were made with other TV and written works.

Overall this was an energetic discussion that involved fans of the show discussing their love for the show and their abhorrence of some of the themes.

If you’d like to discuss this more, I’ve posted the Charming Brotherhood separately to facilitate discussion.

PRK, Alison Goodman and Narrelle Harris discussed: “From vampire assassins to wizard private eyes to undead thugs, crime has been mixing it up with fantasy for years. What is it about crime, noir and the paranormal that’s so appealing?”

There was talk about crime and about fantasy and about crime in fantasy. I think Narelle summed up the whole discussion when she concluded with a shrug that fantasy is a setting in which things happen, and often those things that happen include crime. The journey to get to that point was interesting, with authors talking about their own works, other people’s works that they’ve enjoyed and a little about the theory of genre.

Racebending and raceface in the 21st Century

Liz Barr, N. K. Jemisin and Stephanie Lai talked about “The Last Airbender, Cloud Atlas, Earthsea, book covers that portray characters of colour as white. Why do they keep doing this? And why doesn’t it ever go the other way?”

Earthsea was hardly mentioned but Airbender and Cloud Atlas kept cropping up, particularly with regards to actors portraying people from other people groups for various reasons.

The obvious example was Hugo Weaving attempting to look Korean while being a more convincing Romulan in Cloud Atlas. Apparently the public assumed one of the actors in the Last Airbender was Tibetan, the nationality of the character he portrayed.

The panel discussed an upcoming movie where a famous actor will wear prosthetics and makeup to pass herself off as a coloured person instead of employing someone who looks like the historical figure in question.

I raised the issue of actors portraying people with disabilities instead of employing people with disabilities; one of the panelists responded by calling that ‘crip-drag.’ While ‘crip-drag’ is a real term, I urge people not to use the term ‘crip’ unless you identify as disabled; otherwise this term is on a par with calling African-Americans ‘niggers’ or Chinese ‘chinks.’ Although I raised this issue of terminology, I felt the panelist and I were in accord with regards to sentiment so I did not take offence.

The topic of people of colour passing themselves off as lighter or a more socially acceptable – the ‘more equal’ – race, was lightly touched upon.

(During the discussion of raceface I cringed, feeling more than usually conscious of wearing make-up to make myself look darker-skinned, and the hair-dye that still hasn’t grown out. Ironically, my motives are the same as those of people of colour attempting to look white: to pass for ‘normal’ or socially acceptable.)

Justine Larbalestier was mentioned as a bookcover was imposed upon her featuring a white woman; Justine was powerless to do anything about this, so wrote a throwaway line in a blog about not being happy. Fans campaigned. The book cover was changed. No-one seemed to have concrete figures about book sales with either of the covers but the feeling seemed to be that sales may have dropped with a darker-skinned woman on the cover. This is another issue: how do you build equity while taking a hit in hip pocket?

This led to discussion about colour of people on covers and in the main story; N.K. Jemisin’s fantasy series focusing on Middle Eastern peoples with dark skin has not sold well. Nora believes this series hasn’t attracted white readers and, perhaps, hasn’t attracted public attention the way it might have if it was a more traditional fantasy. Personally I’m a bit over the traditional European Middle-Ages style fantasy; this is one reason I’m so enthusiastic about international political fantasy stories and Jo Spurrier’s Winter Be My Shield.

I would love to continue this discussion over on this page.

Alison Goodman, Amanda Pillar, Paul Poulton, Jane Routley, Darren Sanderson discussed “What do fantasy authors tend to get right and wrong, and does it matter anyway when they’re throwing magic into the mix?”

I made the mistake of not photographing every single panel I attended so now I’m a bit fuzzy on whether I attended this panel or whether I’m confusing other discussions with this topic. Certainly the topic of researching reality for a fantasy world keeps cropping up for me, before and after Brian McClellan’s guest blog on the topic.

I definitely saw at least one panel featuring Jane Routley. The entire panel, I drooled over her hardcover copy of Mage Heart that she placed tantalisingly close. I also remember Darren Sanderson’s pragmatic approach coupled with his knowledge of ancient weaponry added an extra dimension to a few panels. And Alison Goodman is always good value, especially with regards to crossing genres and doing research.

After the second book launch, late in the afternoon, Edward and I went to dinner with Joel Shepherd. When we returned we wandered around then settled in the bar briefly before heading home to catch some zzzz’s before my panel on Monday. 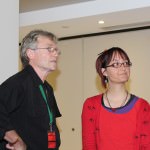 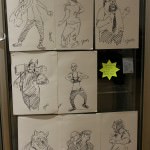 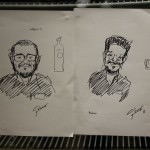 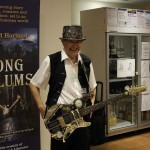 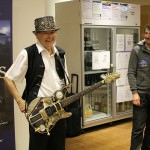 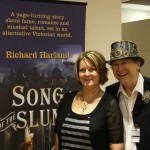 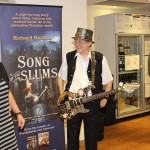 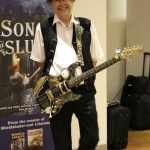 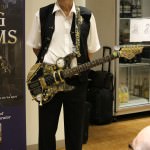 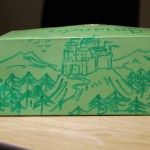 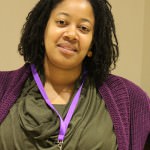 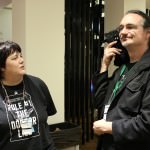 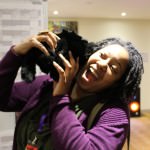 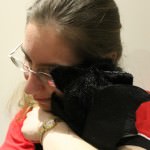 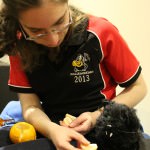 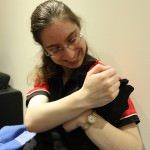 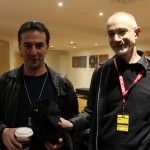 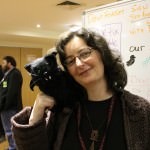 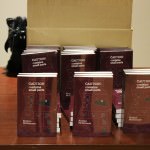 Edgar Allan Purr wonders if he can salvage some books… 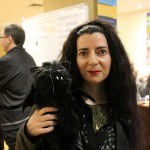 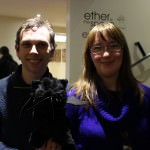 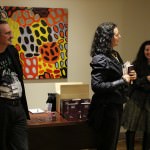 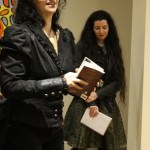 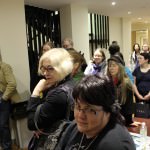 The crowd at the booklaunch 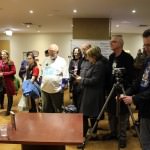 The crowd at the booklaunch

Russell B. Farr, CEO of Ticonderoga Publications, wrote my Continuum report for me:

“At Continuum on Sunday stuff happened. The guests all continued to be awesome, some fans complained at some minor stuff, but overall I thought things ran smoothly. I then headed to the bar for much insightful conversation.” Done.