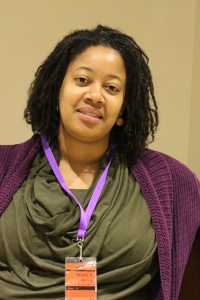 Saturday at 12 noon, N.K. Jemisin (aka Nora) gave her guest of honour speech. Although the speech was altered, ad libbed and generally evolved from the written form, Nora put her written speech online here.

While some people may have been offended by Nora’s interpretation of Australia’s history, Nora meant no offence to Indigenous persons nor did she mean to disrespect their sufferings and their fight for equality. That this conversation is taking place at all is a sign of progress and may lead to more progress in the future.

Twenty years ago, who would have contemplated a science fiction convention with a social justice theme and a black woman as a guest of honour?

The difficulties faced by minorities may seem insurmountable. We need to remember how to eat an elephant: one bite at a time. (I am not advocating the killing OR eating of elephants, this is a metaphor.) That a conversation is taking place, that minorities are part of this conversation, is a sign that we are evolving. It is important to never give up and never let go, and NEVER LET THEM TAKE FROM US THE GAINS WE’VE MADE.

Thank you Nora for an inspiring and encouraging speech.

(I didn’t take a photo of Nora during this speech because I was seated too far away and Nora was backlit, creating a silhouette. This photo was taken the next day. )