Spoilers ahead. Run away, little girl, run away.

Clarke nurses Finn who was stabbed by the Grounder when the team was rescuing Octavia. You think maybe Clarke is under pressure?

Abigail has committed many offences punishable by death but she gets off because she’s not a Redshirt — she’s a doctor.

Three red flares traveling from the 100 landing site across the atmosphere could have been anything including lightning. They’re not evidence of live teenagers even though the chancellor saw them.

The 100 been on the planet for 10 days, their diet doesn’t even include vegetables, but they have moonshine to use as disinfectant when Clarke operates on Finn with her mom directing over the radio. Because amateur surgeons totally win. Remember all those amateur tracheotomies that were on just about every long-running TV series a while ago? Well, The 100 moved south to the chest and lungs.

If his lung isn’t perforated then how is the knife deep enough to be buried in his chest and not falling off when they move him?

While running away from the Grounders with Finn injured, they managed to take Octavia’s rescuer and keep him prisoner as well. Oh, wait, later they SAY they went back for him — DURING THE HURRICANE.

On the ark Abigail can see a diagram of Finn and the knife inside him. They struggle to get and maintain basic radio contact but now they have Star Trek medical imaging. Clarke extracts the knife successfully — it was most of the way through Finn’s torso — then Finn is fine, breathing, holding his chest, raising himself up on his elbow. You’d think it was just a scratch. I guess Finn isn’t a Redshirt. More proof he’s not human.

Meanwhile, Bellamy tries to interrogate the mute Grounder. When hunting through the Grounder’s belongings (a little late in the process) he finds a sketchbook with gorgeous scalloped edging and high-GSM pages, filled with pencil sketches of the 100 since landing. Because a few hundred years after a nuclear war ended civilisation as we know it including manufacturing, high-quality art supplies are easy to come by.

Finn goes into seizures and the radio stops working. Coincidence? I think not, baby puppy.

Sooner or later every science fiction show explores the ‘Who are we? Will we use torture to get what we want? Does the end justify the means?’

‘Contents Under Pressure’ goes down that path and it’s way overdone. If it was meat it wouldn’t be medium or even well-done, it’d be charcoal all the way through. I’d recommend a drinking game for cheese, potholes and melodrama but you’d end up with alcohol poisoning.

In the end, Octavia cuts herself with the poisoned blade to get the Grounder to nod to tell them which vial is the antidote. They rush the antidote to Finn and give it orally because there’s no other way it might need to be adminstered. Octavia doesn’t need the antidote; she must be immune even though the Grounder thought she’d need it. More proof she’s not human!

The 100 is like a roller coaster: some episodes are up in quality and others are down. It can be fun to watch as long as I don’t take it seriously and expect West Wing–quality writing because West Wing or The Expanse it ain’t! The characters can be engaging at times and, at others, they annoy me. I will continue to watch the series but I’m not burning through episodes like I do with series like Game of Thrones, Alpha House and other well-written stories. 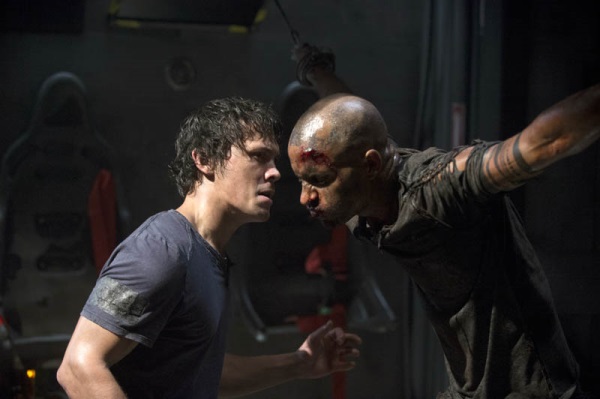