The Containment Authority processes — and abuses — the captive Hairies while Cleverman explores his new abilities. And his brother seethes with jealousy.

In the previous zode, Jimmy West breathed life of some kind into a corpse after promising Slade that he’d give him a spirit. The corpse — a woman — is still unconscious and held prisoner and yet she calls to Koen West (Hunter Page-Lochard).

Belinda Frosche (Leeanna Walsman) is a reporter having an affair with Waruu West (Rob Collins) who’s told her how Uncle Jimmy had his heart ripped out. She arrives on the scene to get an exclusive on how a boy was brutally murdered during soccer practice when he ran to fetch a ball he’d kicked into the bushes. (Moral of the story: either kick straight or stay off the soccer field.)

Slade (Iain Glen) sets it up so the exclusive airs in the middle of an interview program pitting Minister for Immigration and aBuse of Minorities — oops, Minister for Immigration and Border Control Geoff Matthews (Andrew McFarlane) against Waruu West as spokesperson for a community of Aborigines and Hairies. The show’s host decides the murderer is a Hairy without any evidence although Frosche leaves it open.

Meanwhile, the Hairy men captured in the first episode are taken to a detention center, bullied and abused almost as if they’re real refugees in an Australian or offshore refugee camp.

Slade’s motives start to look suspect as he seems to be framing the Hairies for murder and he mentions setting up an ark for his wife and himself.

Koen explores his powers and tries to follow the voice calling…

Matthews as minister uses actual quotes and tactics from the current Australian government’s dealing with refugees, making his performance all the more chilling. This is what speculative fiction and fantasy are for: to explore real issues via fiction to effect change — or, at least, raise awareness.

White oldie Jane O’Grady (Robyn Nevin) helps a Hairy teenager, bringing ‘Containment’ a passing score for the Bechdel Test. (It shouldn’t be this hard [to pass the Bechdel Test! Note: the teenage Hairy has a name but trying to work out who’s who on IMDB can be bloody difficult!)

What Cleverman lacks in the women’s department, it more than makes up for with people of color, primarily Australian Aborigines and Maoris, in key roles. Deborah Mailman as Aunty Linda has gone from the token disabled black woman in Outland‘s cast of white men to one in a cast of many colored people in Cleverman. Yay!

There were a few points where I’m sure the actors were like ‘WTF?’ instead of immersed in their roles and yet I’m curious as to where Cleverman  is going. Containment failed. What’s next? 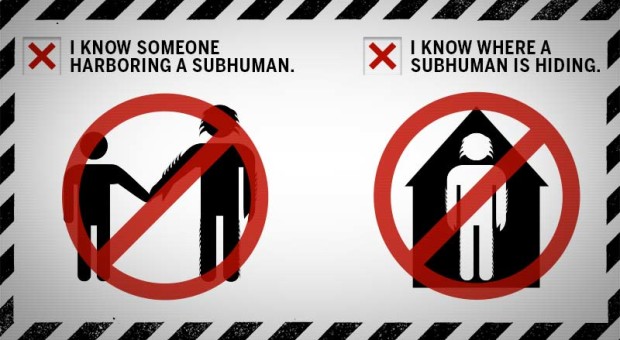