It’s England in 2020 and there are over a million sentient anthropomorphic rabbits living in concentration camps – I mean “residential” camps – with some allowed to live in the human community. There are also a few other species but none suffer the derision heaped upon the constant rabbit. Some – mostly rabbitly predators – are allies, at least until such time as rabbits cease being a problem.

Peter Knox and his daughter Pippa live in Much Hemlock when Mrs Constance Rabbit comes to the library during the 6 minutes it’s open. Cue satirical discussion of service cuts and librarying. Connie tries to borrow a book but the white supremacist humanists on the library team attempt to prevent her. Peter steps in, allegedly to ensure the library opening does not overrun its six minute allowance.

Then it turns out Connie moved to Much Hemlock.

And trouble is afoot.

If political satire is your genre of choice, the Constant Rabbit is a novel not to be missed. Fforde lampoons UKIP, the Tory obsession with slashing services until results are comical, Trump and – at times – even takes a dig at himself, for having two “f”s in his name.

The Constant Rabbit vs white supremacy

It’s obvious from the outset that rabbits are a metaphor (or allegory?) for people of color. Most explicitly and deliciously, rabbits are a metaphor for people of color who’ve lived in Britain for centuries but who suffer racism and attempts to eject them from their homeland. Fforde delves into these issues in a manner worthy of Max Barry (see Jennifer Government, Company and Machine Man).

The Constant Rabbit and disability

Peter Knox’s human daughter, Pippa, is disabled. And what a representation of disability it is! Most people might not notice Pippa’s disability because it’s understated. She had an accident some years ago, Peter funded modifications to the house so she could live downstairs and have a “wet room” –an accessible bathroom. However, it’s not clear if Pippa is in a wheelchair or uses canes or crutches or what. I’m thinking a wheelchair because Peter asked someone if she “beckoned you down to her level and then thumped you in the eye?”.

This representation is vague because Pippa’s disability is not a focus. It’s not a plot point. Her disability is just a thing that happened, that benefits from the smooth ground (no steps) when she visits a rabbit warren and things like that.

I’m also fairly sure, although I can’t find the passage now, that someone said something about Pippa being inspirational only to get an acerbic retort through gritted teeth. That was early on, before I grabbed my post-it flags. Thus my undying admiration for this novel was born.

Fforde’s joyful expose of rights vs responsibilities is delicious. It’s laborious, difficult, stressful and expensive to be forever defending one’s rights. However, in a society – like the rabbits’ – where they emphasize and enforce responsibilities, one’s rights are automatically protected. Except from humans, but that’s racism/speciesism.

The Constant Rabbit is gritty political satire at its very best. Nigel Farage is Nigel Smethwick, Prime Minister with the UKARP – the anti-rabbit party – catapulted into power. A tangerine fox with surprisingly small paws is a predator. Rabbits are, for the most part, peaceful, forced into Black Lives Matter-equivalent protests. During these protests they sit, silently working through advanced mathematical problems, winning through being cute while unnerving their human overlords. Fforde’s Rabbits as people of color and Pippa Knox as disabled created the most universally feminist novel I’ve read in a while.

I highly recommend The Constant Rabbit and I’m giving it 5 stars for plot, story, representation… 5 stars.

Read this if you enjoyed Machine Man by Max Barry and Maybe The Horse Will Talk by Elliot Perlman. 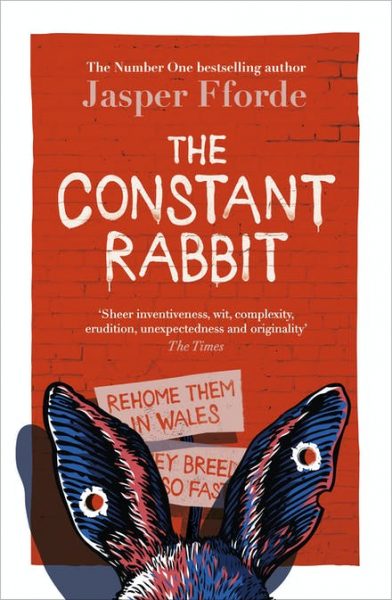