Congratulations, Michelle Goldsmith is the winner!
(I just spelt ‘winner’ as ‘winnter’; I suspect winter is coming is on my mind.)

I’ll post those books to you in the next couple of days.

Hachette has re-released Lian Hearn’s Tales of the Otori in paperback form to coincide with her new novel Emperor of the Eight Islands. Dark Matter Zine and Hatchette are giving away one copy each of the Tales of the Otori books 2, 3, 4 and 5. To enter, email editoratdarkmatterzinedotcom with “Tales of the Otori” in the subject heading and your name and address in the email. Entrants must have an Australian delivery address.

Lian Hearn’s beloved Tales of the Otori series, set in an imagined feudal Japan, has sold more than four million copies worldwide and has been translated into nearly forty languages. It is comprised of five volumes: ACROSS THE NIGHTINGALE FLOOR, GRASS FOR HIS PILLOW, BRILLIANCE OF THE MOON, THE HARSH CRY OF THE HERON and HEAVEN’S NET IS WIDE. The series was followed by two standalone novels, BLOSSOMS AND SHADOWS and THE STORYTELLER AND HIS THREE DAUGHTERS, also set in Japan. EMPEROR OF THE EIGHT ISLANDS is Books 1 and 2 in The Tale of Shikanoko and is followed by LORD OF THE DARKWOOD (Books 3 and 4).

Lian has made many trips to Japan and has studied Japanese. She read Modern Languages at Oxford and worked as an editor and film critic in England before emigrating to Australia. For the latest news from Lian, visit lianhearn.com, follow Lian on Twitter, or join the readers who have become Lian’s friend on Facebook.

Terms and conditions of Tales of the Otori books 2–5 competition: 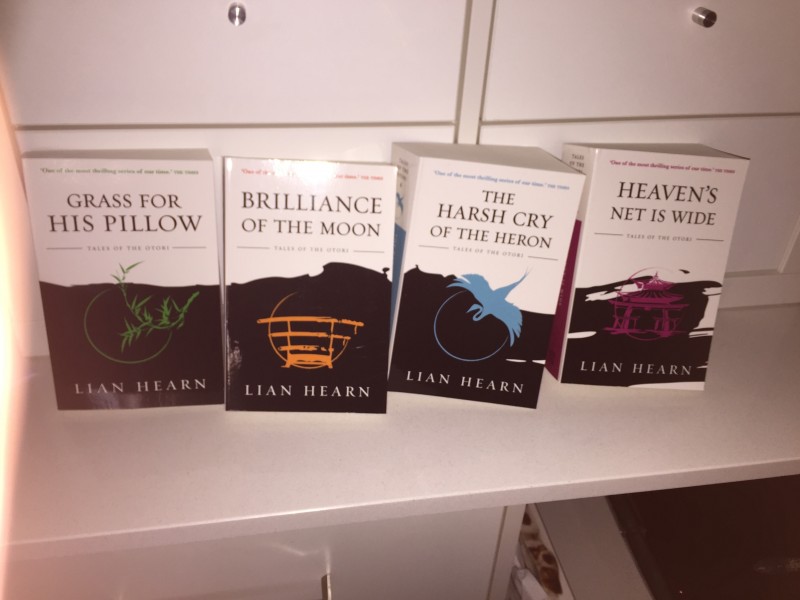