In his non-fiction book Turning Point social researcher Hugh Mackay talks about Australians’ nostalgia for villages as evidenced by the village-esque look of new housing estates.  People are herd animals, he says, more and more associating with cafes to be with the herd while our homes are increasingly isolated, the single-person home becoming normal.  As we look for community we often find barriers, disappointments, frustrations.  Why?  I’d say part of the problem is competition destroying community.  That desire to be alpha male or alpha female fractures the community, fragmenting the hierarchy so the king or queen of the hill has a smaller hill upon which to sit.

My experience of the science fiction and fantasy community is not unlike my experience of World of Warcraft (WoW).  It’s hard enough for me to play at all because of the whole disability access issue.  Imagine that reading is difficult, and reading small print is either migraine-inducing or impossible.  Now imagine that you want to play a game that involves some text.  It’s not easy but I (kind of) manage.

Playing the game is difficult.  I’m not good at PvP (player versus player) because seeing means I’m slow to figure out WhoTF is attacking me.  Also I’m not good at moving and hurting people, I prefer standing still and healing…  🙂  This means that raiding (working in a team to achieve mutual goals) is great for me as long as people are working as a team and not competing.  It’s funny that people compete against each other when they’re supposed to be working together, but they do.

Then there’s gathering of resources.  In World of Warcraft spam bots gather the goodies making them disappear before your eyes.  Rival players race you or, if they’re from the opposing faction, kill you to get the resources first.  Or, while you’re fighting a game-generated enemy (MOB), other players walk around you to get the resources that were your sole reason for fighting that bloody MOB in the first place.  To add insult to injury they often make rude gestures or sledge as well.

Imagine a world where people share.  Imagine a world where you’re rewarded for working in harmony with others, stopping to help a fallen comrade instead of striving onwards to earn more gold, to win that prize…  Oh, wait, there is a world like that.  It’s called Guild Wars 2 (GW).

I’ve been playing GW now for a few weeks off and on.  Setting up wasn’t the easiest.  There is some flexibility with the user interface for magnification but at the end of the day I changed my screen resolution to find the best compromise between larger icons & text, trying not to lose important information off the edge of the screen.

With regards to gathering resources, I LOVE GUILD WARS 2.  It’s an MMO which means that it’s a massively multi-player online like WoW but with a huge difference – you’re not competing for resources.  Hubby and I can wander around together, both chopping down the same trees for the same resources, doubling our rewards for working together.  We can harvest the same herbs and mine the same minerals as well.  This might seem divorced from reality, but think about people working together in pursuit of common goals – how often is working together not only more rewarding but also the outcomes are better?  Together we can achieve a higher standard, reach more people, cover more ground…

A bad guy needs to be defeated in GW.  I rush in to help.  I’m an ‘elementalist’, I wear cloth armour so I am ‘squishy’ (more vulnerable than someone in plate or chain mail).  I DIE.  Woe is me!  I lie there alone, unmourned…. oh wait, A COMPLETE STRANGER TAKES TIME OUT FROM THE BATTLE TO RESURRECT ME.  There is no competition for loot or for accolades AND HEALING SOMEONE GIVES REWARDS TOO.  Not only does healing and helping others give rewards, but raising a fallen comrade helps everyone take down the boss (computer-generated really tough bad guy) more effectively.  Even just walking around questing normally, strangers help one another out with killing the MOBs (computer-generated monsters or villains) and resurrecting one another if someone dies.

Imagine if people didn’t feel a need to tell me that I am a ‘self-important twit with delusions of adequacy’ [direct quote from ‘Gerald Fnord’ who provided a false email address to accompany his comment, one of the more repeatable comments I chose not to publish so as not to give detractors their payoff].

Imagine if people believed that co-operation, working in harmony, would cause them to reap more rewards in the long run.  Instead of feeling compelled to compete for support, imagine if people networked, helping fans find books, zines and podcasts that they will enjoy.  Imagine if people wrote for one another’s blogs, interviewed one another respectfully…  It’s fabulous that this happens already to some degree.  Imagine how productive, how much more variety and creativity there would be if no-one sniped at creators.  If the people who disliked a creator or a project said nothing instead of setting out to tear others down.  Imagine if conversations provided inspiring constructive feedback that helps people raise their standards….

When Dark Matter’s website was originally launched on 29 April 2012 I had a variety of feedback but there was one person who gave really constructive feedback.  His name is Darren Turpin, my contact at Angry Robot.  I don’t know Darren personally and I haven’t even had much contact with him, but Darren is FUCKING AWESOME.  Darren took the time to write me a few emails detailing what was wrong with the website, why it was wrong and HOW TO FIX IT (not the fine detail, but ‘use WordPress, it’s capable of THIS’ <points to Angry Robot’s website> and several other paragraphs of information and advice).  This meant a complete restructure of the website, which has taken a huge amount of time and effort as hubby and I aren’t web design people, but the current version of this website is a direct result of Darren’s feedback.

What I’m saying is this:
1)  if you can’t say anything nice and your goal in saying anything is only to tear down and destroy someone else, then don’t say anything at all.  (note: depending on the topic this does not necessarily apply when commenting on posts, but if you wouldn’t make the same comment in person to a friend, then think twice.)
2)  If you want to say something that is both positive and negative and your motivation is to be constructive, think of a ‘shit sandwich’ – say a nice thing, then a negative thing, then a nice thing.  If you can’t find 2 nice things to say, then go back to 1 and check your motivation.
3)  Say nice things if you want to – I guarantee you that a lot of people will hear more shit than nice things, so your supportive comments will shine like tiny nuggets of gold in the muddy creek of life.
4)  Don’t see the science fiction and fantasy community as a competition, see it as a beautiful quilt created by the community at a quilting bee: more hands means less work.  More varied pieces of fabric means more beauty and creativity in the finished product: one piece of fabric AIN’T a quilt!

We are as diverse as our coffee mugs, let’s celebrate diversity!  Star Trek said it best: unity in diversity. 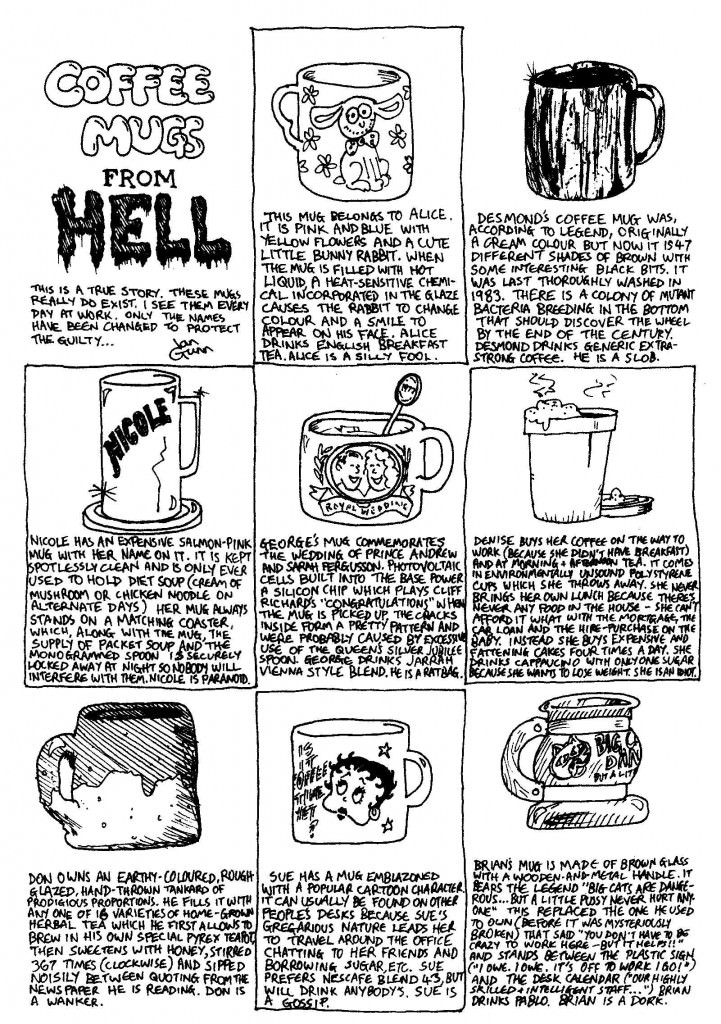