A guest blog by Rachel Nightingale

I can’t remember a time when I didn’t know about Harlequin, Columbine and Pierrot so it always comes as a surprise to me when people look blank when I say ‘Harlequin’s Riddle is about the Commedia dell’Arte’.

I’m not clear when I first became aware of these wonderful characters, but it was probably when my great-aunt gave me a tin with Pierrot on the lid. Inside was a facewasher and two soaps, also with different Pierrot images. Anyone who grew up in the 70s is probably very familiar with the classic images by Mira Fujita. The Pierrot in them is feminine, the face expressive. These designs were everywhere: on posters, on toiletries, on notebook covers. And Pierrot is the perfect icon for teenage girls – too sensitive for the world, and always yearning for something just out of reach (the beautiful Columbine).

Fujita’s images may be the reason that Pierrot is the most remembered of the Commedia characters today, but in fact he was a late addition to the line-up, and a minor character usually played by the youngest son, since player troupes were often families.

Harlequin too has survived, perhaps because tricksters have enormous appeal – just look at the current wave of interest in Loki in the Avengers movies.  Audiences are less familiar with other characters now. But, in their time, the public adored them.

The Commedia dell’Arte is essentially improvised theatre. It was usually performed in public spaces. This is in contrast to the scripted Commedia Erudita that troupes performed on private indoor stages. It appeared in Italy in the mid to late 1500s and its features, including slapstick humour and music, probably developed in order to compete with the noise of the marketplace. Those who look at the history of the Commedia suggest it grew from the antics of charlatans trying to sell their wares through any means possible. 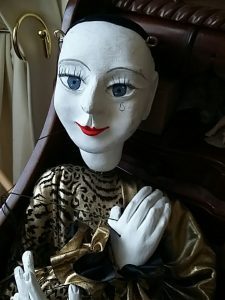 Although Commedia performances were improvised, they had a clear framework from which performances grew. There were core characters, including the old men, Pantalone and Il Dottore, the lovers, the servants (known as zanni), Il Capitano (the Captain) and Columbina. Then there were secondary characters such as Pulcinella (later Pierrot), Scaramuccia and others. Harlequin, originally known as Arlecchino, was one of the servants.

Costumes, status, posture and walk, and especially masks set every character apart. Thus, audiences knew immediately who they were, and the function they would serve in the story.

Performances also included set scenarios, or outlines of the events. Characters had set passages to recite, a repertoire of anticipated sight-gags, and particular ways of interacting with other characters. This means the improvisation actually occurred within very specific boundaries.  Much as Hollywood movies now follow certain tropes and patterns, Commedia audiences expected to see familiar characters, events and actions.

As with any popular form of entertainment, Commedia has changed over the centuries since its birth. Whilst troupes today try to maintain its original framework and characters. Commedia’s influence is noticeable in Punch and Judy shows, Cirque de Soleil and even musical theatre. The latter grew from the Commedia-like vaudeville performances of the early 20th Century. Even removed from their Commedia roots, the characters still resonate with modern sensibilities. Like Harlequin the trickster, Pierrot the sensitive, and Columbina the unattainable beauty.

Commedia dell’Arte’s enduring characters and the magic of improvised theatre sparked my imagination, offering a world of possibilities that I explore in Harlequin’s Riddle.

Rachel Nightingale was a highly imaginative child. She used to pretend she was wandering the woods looking for adventures on her way home from school. Once she understood creating stories gave her magical powers she decided to become a writer. Some years, and many diversions later, she is an award-winning playwright, and the author of The Tales of Tarya trilogy, a fantasy series published by Odyssey Books. After surviving improv theatre she traveled the world and immersed herself endlessly in research and creative practice. Now she often finds herself at the mercy of stories that demand to be written.