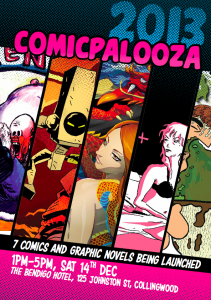 Well, it’s better than the usual rubbish. In this case, I want to introduce you to another multi-book comic launch

Comicpalooza, being held on Saturday December 14 from 1-5pm at the Bendigo Hotel – 125 Johnston St. Collingwood.

There’s 7 books being flung atcha, the key one being Ink Tales, the big anthology of comics about Tattooing that I alerted you to the IndieGoGo campaign about a few weeks ago.

The campaign was successful and the book is almost here! I among many of the artists, will be present to sign books on the day. It’d be swell to see you there. Head on over to the Facebook page and spread this one around. For all I know, you probably have already heard about it via Facey, but I’m not on it, so I’m just doing my bit via old fashioned email as I like to.

Of course there’s lots of other books to check out too, though I’m not really familiar with them, hence that’s exciting: what will we find?

One other thing: if you like music, you may want to check out my friend Scarlette Baccini’ band Dear Plastic, who have a great single on Triple J unearthed called ‘Everything’s Coming Up Roses’. They remind me a bit of Tiny Ruins, Portishead, a little bit of the Jezabels, Dead Mens Bones and a dash of Bjork. Scarlette has lovely ethereal vocals. And she’s a fine comics artist too. Yes, yes, plug your friends why don’tcha, but really, I think this band is worthy of wider renown.