An absolute scandal! Coffeegate is a thing!

Yesterday the minion went shopping. While he was out, I decided to take a short break from doing chores to have a coffee and —

The coffee jar was EMPTY.

Worse, when the minion returned, HE DIDN’T BRING COFFEE.

As I don’t drive for the general safety and well-being of everyone on the streets of Melbourne, the minion went back out to fetch some coffee.

Friends assure me that coffeegate is grounds for divorce.

Or, at least, grounds for SOMETHING to do with grounds.

Today, I have more than sufficient coffee. In fact, I may have had one too many. Or two too many…

Anyway, I’m struggling to do some housework. Not just the usual vacuuming but the post-semester tidying.

Used to be when I did the housework I would sing this litany “Why did I get married? Why do I have children?” as I scrubbed, cooked and cleaned endlessly.

Now my complaint is more along the lines of “WHY DO I STUDY? WHY DO I DO DARK MATTER?” as the mess includes a lot of publicity mail, empty boxes, booksssss, my precioussssss boooookses for which I don’t have enough bookshelves. Or enough time to read them all, write all the things I want to write and do all the reviewing. Sigh.

I’m also acutely aware that I’m behind in my ‘items received’. Looking at other people’s posting of their ‘review items received’, I think the way to go is just to post photos without the hours’ long post supporting them including links & excerpts from websites. Because I just. don’t. have the time to do all the things. I’m sorry.

Below are photos of the piles of books waiting for acknowledgement. Books that have already been reviewed have been put away. Books that have gone to other reviewers aren’t here. eBooks aren’t here because, y’know, EBOOKS. Also, there may be one or two here for which I actually paid money that have become mixed up with review books.

Apologies to anyone who has sent paper books that haven’t been acknowledged. If you let me know, I’ll see if I a) received them and b) have them here to photograph.

Thanks very much to all the awesome authors, publicists and publishers who send all the things for review. Cheers. 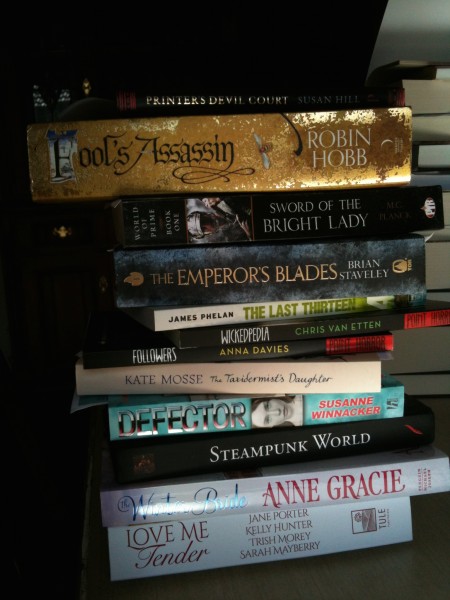 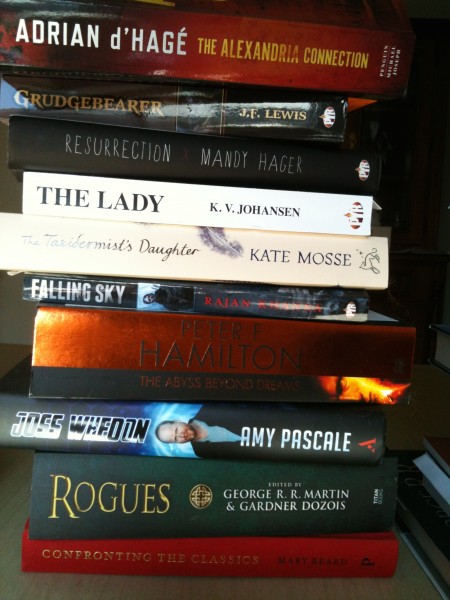 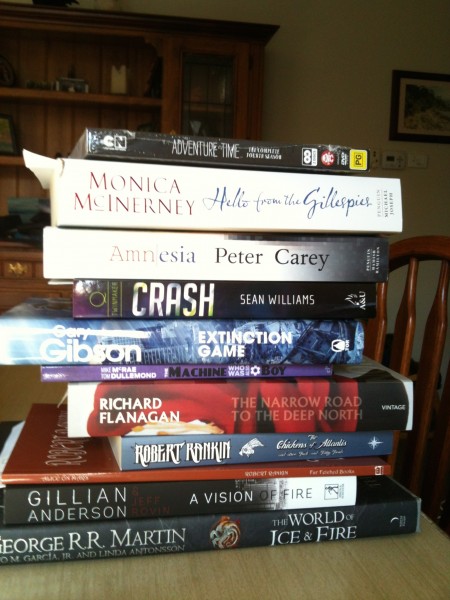