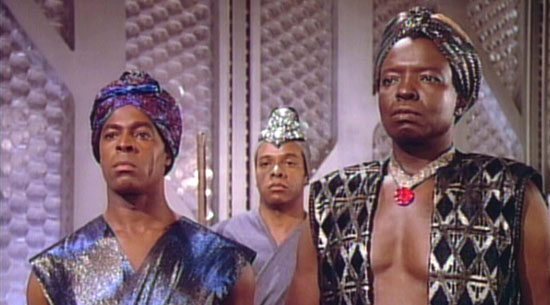 The Enterprise is about to receive a visit from some aliens with a strange code of honor. Captain Picard (Patrick Stewart), Commander Riker (Jonathan Frakes) and Counsellor Troi (Marina Sirtis) have some awkward conversations about what to expect, reiterating briefings they’ve all obviously heard before.

It’s times like this I miss the Doctor’s companion asking the dumb questions.

The aliens are sexy black men with buff bodies and lots of exposed skin beneath their crisscross tops and capes. The sexy black men question Lieutenant Yar’s (Denise Crosby) position as senior security officer on the basis of her gender. A side comment from Lutan (Jessie Lawrence Ferguson) reveals he’s been looking for a woman like Yar so it’s no surprise when he kidnaps her.

Or when he proposes marriage. Or when his “first one” (wife) challenges Yar to a duel.

Yar doesn’t immediately say “Fuck no, you’re welcome to him”, which is the big surprise.

Aside from the theatrical nature of the plot and the acting, the interesting thing about this story is the “primitive” society’s conventions. Lutan’s “first one”, his wife Yareena (Karole Selmon), is jealous, determined to defend her rights to “her” man although that marriage vow can only be broken by death. And polygamy is allowed. By both genders.

By the end of the zode I figured the writers had probably lost track of their established social code but it was potentially interesting.

I liked Yar’s final comment on the subject of Lutan. And the expression on her face as she said it. Definite win.

On the other hand, perky teenager who almost destroyed the ship last zode is now sitting at the conn on the bridge as a reward. Sure, he’s the chief medical officer’s son — nepotism — but in the first zode didn’t Picard declare humanity past those petty concerns?

When I watched the series years ago, Wesley didn’t annoy me as much as he does now. Now I’ve had kids of my own. Now I’ve had teenagers of my own. Now I have reviewed all the things for over 4 years and I want things to make some kind of sense and I’m sure Starfleet has a rule somewhere stating that CONN OFFICERS MUST BE OFFICERS. NOT JUST PERKY TEENAGERS.

And can I say: PERKY?! His perkiness annoys me just as much as a cute perky blonde teenager or young woman would annoy me in just about anything else. No, perky is not an attractive attribute.

Perkiness is an excellent attribute in a villain about to be brought low. Yes. Yeeessssss.

So. “Code of Honor” is light entertainment, a few smiles in terms of finding Yar’s soft spot for some hunky man-flesh not to mention seeing some hunky man-flesh instead of only focusing on Yar’s butt as she walks through the Enterprise. The plot was a bit clunky but it was okay. Wesley was perky. No-one cried ‘nepotism’ but Troi called Yar on her lustiness. As friends do.