This is the story of a spy mission with the code name bananas. It all begins with Eric, who loves animals. So much so that his best friend is Gertrude the Gorilla. He teaches Gertrude to blow raspberries. So Grandma yells at him after beating people with her hearing trumpet. Then she takes him home.

Obedient little boys go to bed when told. So Eric goes to bed… then sneaks out the window to visit Gertrude.

Nazis bomb London, killing Eric’s grandma because she’s deaf and Eric wasn’t at home to tell her to go to the bomb shelter. But it wasn’t his fault, according to everyone.

Anyhoo, Eric’s escapades at the zoo end up with Eric banned for life and Gertrude sentenced to death. What follows is a hilarious and impossible adventure involving dirigibles, Nazi spies, and smuggling a full grown Gorilla from London to the seaside.

Code Name Bananas is bound to be a hit with children and carers alike so it would be wonderful if representation of disability was positive and inclusive. However, Walliams’s novel leaves a lot to be desired. I guess that’s not surprising considering his history in comedy tv shows. Particularly Little Britain, for which Walliams has writing credits on 23 episodes. Little Britain was banned, removed from BBC Player, Netflix and BritBox due to its use of blackface. Walliams’s Little Britain is also offensive to, well, just about every minority group.

Little Britain does far more to promote racism, sexism, homophobia, ageism and classism than it does to satirise them.

Given Walliams’s history of Pander[ing] to Prejudice, it’s not surprising that Code Name Bananas uses disability as a vehicle for laughs and plot points.

Grandma is “deaf” so, this being the 1940s during World War II, she uses a hearing trumpet. Cue the usual jokes about hearing impaired people misunderstanding others.

Grandma is also initially portrayed as quite awful despite the undercurrent that carers might notice: she’s angry because she loves Eric and wants to keep him safe. It’s not until just before she dies that Walliams fleetingly reframes Grandma from cranky scary old person to loving Grandma. Then she’s dead.

I agree that children should not be saddled with responsibility for adults. And yet it’s hard to read this story where the boy is naughty. His naughtiness means he’s not there to tell Grandma to go to the bomb shelter so she dies. I hoped that Grandma just forgot her trumpet and would turn up at the end, but Walliams fridges her “because plot”.

Then there’s Uncle Sid. He’s a loveable old character who went to France in World War I, lost both his legs due to a mine on his first day and now has tin legs. People mock him for his lack of patriotism and courage. And his legs. They’re loud for comical purpose. They detach for comical purpose. And Sid’s detachable legs also serve the plot. Although Uncle Sid is loveable and reminds me of some WWII veterans, I cringe at the use of disability.

Then there are the animals. Sid collects disabled animals. This menagerie serves to humanize Sid more and to provide – you guessed it – comic relief. Not to mention that they all live in his kitchen. And Sid is a recluse – he never ever has visitors, not even family – because of his menagerie.

Walliams’s use of disability as comedy

Overall, I couldn’t help but think that Walliams sees disability as comical without depth. I give Walliams 2 stars for representation of disability. It’s that high because Sid is a lovely man who joins Eric on his journey. And no animal, no matter how physically challenged, is euthanized in this story. However, I urge all authors to lift their game and represent disability instead of using it to service ableist humor.

Code Name Bananas is illustrated throughout, not like a picture book but with frequent use of expressive font and size changes as well as frequent pictures.

I personally found some font choices harder to read than others, especially serif fonts with “shaking” special effects. However, I think I successfully read the entire text.

Fluent readers without reading difficulties will find this creative combination of textual variations and pictures immersive. Struggling readers may find this difficult.

As I said earlier, I hoped all the way through that Grandma had just left her trumpet behind and not been killed in the bombing. After all, Eric’s parents both died (before the novel) then his Grandma died. The net effect was a creative exploration and normalization of grief mixed in with the comedy. Although Grandma’s death, and its manner, following on from Eric’s parents’ deaths shocked me, I liked Walliams’s normalizing of grief as a process.

Code Name Bananas will be a hit with primary school children although it may cause problems for those who are Deaf, hearing impaired, or have detachable limbs. I would like to think that Sid’s representation – although distasteful to me – actually helps children missing legs. The Last Leg cast use legless humor themselves but the difference is that two of the three do not have a full complement of limbs whereas Walliams is laughing at disabled people. And his career consists of laughing at minorities while pandering to prejudice.

Code Name Bananas will appeal to a lot of children. However, due to its representation of disability, I cannot recommend it.

Read this book if you enjoy David Walliams books like The World’s Worst Parents. Emma Streeton and her girls wrote the linked review. And they love all of David Walliams’s books unreservedly. 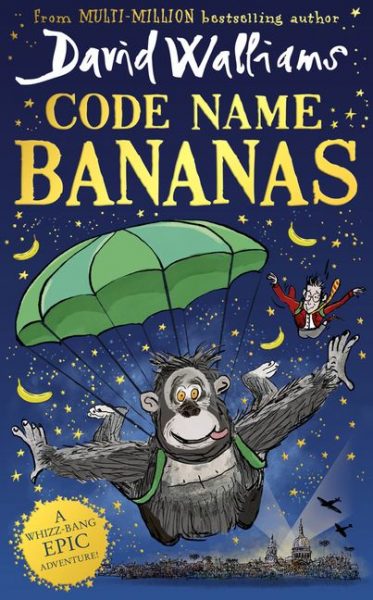