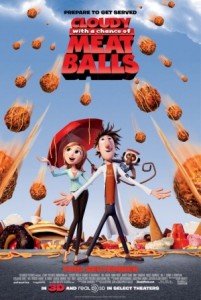 Cloudy with a chance of meatballs is about Flint Lockwood (Hader), a child inventor who grows up to be his small island community’s constant annoyance. Most of Flint’s inventions don’t work at best and cause havoc to the community at worst. That is, until he finds a way to turn water into a unlimited variety of foods. This is a breakthrough for the island population that has eaten only sardines since the rest of the world stopped eating the fish that supported the island’s economy.

However, accident prone Flint’s invention malfunctions and rockets into the atmosphere. Soon after, the sky begins raining cheeseburgers and the town rejoices. Flint forms a friendship with weather girl Sam Sparks (Faris) who is fascinated by the prospect of food raining from the sky. As Flint succumbs to the demands for different foods from the town, his invention begins to reach a dangerous level of instability culminating in what will be the perfect food storm. It’s up to Flint and Sam to save the day, with a little help from their friends.

I really enjoyed watching Cloudy with a Chance of Meatballs. It was fun, it was whimsical and the characters were adorable.

The plot didn’t deviate too much from what you would expect. The film is about an inventor whose father misunderstands him. He meets a girl and creates an incredible invention. However, Cloudy follows this formula in an interesting, new way.

The voice cameos in this film were outstanding. As a horror fan, I was thrilled to hear Bruce Campbell as the mayor and James Caan, who I will always think of as Paul Sheldon in Misery, as Flint’s father. Mr T as the island’s police officer made the A-Team fan in me squee a little bit. Neil Patrick Harris voicing the gummy-bear-obsessed monkey was brilliant, just brilliant.

The animation style was a lot of fun to watch. The animators of Cloudy with a Chance of Meatballs did exceptionally with the multitude of different foods they needed to have rained, flung around and avalanched.

I can’t see this movie having much rewatchability but if you like fun animated features it is worth grabbing a bowl of popcorn, a pizza, or maybe some jell-o and kicking back for some lighthearted, humorous entertainment.