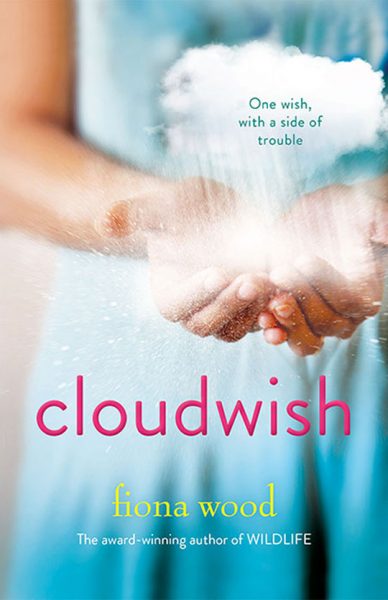 Diversity in YA is not unheard of but nor is it as common as you’d expect in our diverse society. However, Cloudwish by Fiona Wood centres on Van Uoc Phan, an Australian-born Vietnamese scholarship student at a private school who is faced with race and class divisions. Yay for a YA novel with a protag who doesn’t come from a privileged background!!!

Van is back at school after the summer break. A guest teacher asks students to select an article from a shoebox as a writing prompt. By the time the box reaches Van, it’s stripped of all the interesting things except, when the teacher shakes the box, a little vial holding a scrap of paper inscribed “wish” appears from under a postcard. Van takes the vial and wishes. When she tries to return the vial, she can’t find it anywhere.

Her wish — that alpha-boy Billy Gardiner would find her fascinating — seems to have taken root. Billy starts following Van everywhere. Van learns the axiom “Be careful what you wish for”.

Van feels incredibly guilty, wondering “What would Jane (Eyre) do?” because she’s been obsessed with Jane since studying the novel with her tutor a few years earlier. Van almost makes me want to read Jane Eyre again. I won’t because I loathed it when I read it the first time but Van almost makes me want to give it another try. I start to understand why some people love Jane.

At home, Van looks after her mum when she retreats into her annual Post Traumatic Stress Disorder-related depression around the anniversary of her boat trip to Australia with Van’s father and aunt. Yep, they were boat people. Just like Tony Abbott, except TA’s boat trip was a luxury cruise in comparison. Van doesn’t know what happened to her parents; she researches refugees and guesses, feeling guilty, feeling torn between living up to her parents’ expectations and wanting to build a life of her own.

A gifted artist, Van wants to go to art school so she’s taken art as part of the International Baccalaureate program while misleading her parents, who want her to study medicine.

Cloudwish has everything: art, literature, sport, romance, queer best friend, familial expectations and conflict, race and class divides, ethics and philosophy all wrapped up in an engaging story. Plan to read in one sitting. Cloudwish is an impressive novel catering to middle school readers and upwards; it’s a masterpiece.

There will be awards.

Update: there were awards.