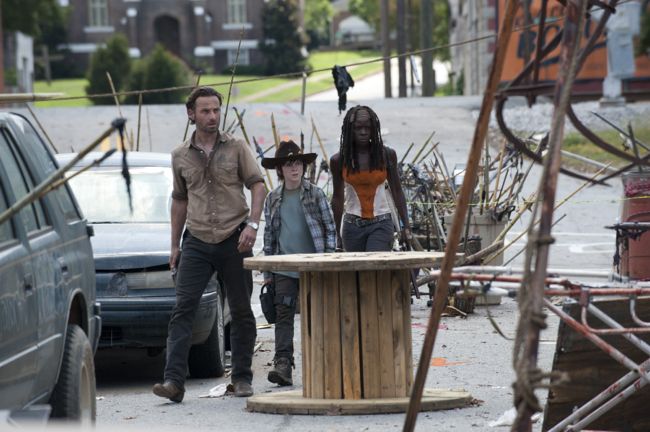 War with the Governor is impending. ‘Clear’ begins with Rick (Lincoln) and Carl (Riggs) return to their hometown to scavenge supplies with Michonne (Gurira). En route they pass the same hitchhiker twice. Both times they drive past him, ignoring his cries for help.

Carl resents Michonne’s presence and makes this clear to Rick.

When they arrive in town, they find the police station has been picked clean of all supplies, weapons and ammunition. The town has graffiti throughout it, claiming the town in the name of an unmentioned resident.

Rick’s group proceed through the town, ignoring warnings, and end up in a shoot out with the town’s sole living resident. Carl shoots the man in the chest. However, he survives as he is wearing body armour. When they remove his mask, it is Morgan (James) from season one.

Michonne wants to take his arsenal of weapons and leave, but Rick insists on staying until Morgan awakens. Carl claims to want to get a crib from a nearby store for Judith, Michonne offers to go with him. It turns out that Carl wanted to go to a nearby cafe to obtain a picture of himself with his father and his now dead mother.

The cafe is crawling with walkers though and Michonne helps Carl distract them. When the plan goes bad and Carl thinks he has lost the picture for good, Michonne risks her own life to get it for him.

Meanwhile, Morgan awakens and stabs Rick. The two men fight and Morgan finally realises who he is fighting. He then becomes furious that he couldn’t contact Rick earlier. Morgan reveals his son Dwayne was killed by the walker incarnation of his mother. Morgan blames himself because he couldn’t kill her.

Rick offers, pleads and begs Morgan to join them and return to the prison. Morgan refuses.

The episode ends with Rick’s group returning to the prison. They pass the mauled body of the hitchhiker and stop only to collect his backpack.

One of the things I’m enjoying about season three is the reappearance of characters from season one. I must admit, I thought both Merle and Morgan were goners but their reappearances have both had interesting impacts on the lives of our heroes.

The scenes with the hitchhiker were both stunning and perfect for showing where the group are currently at. Trust no-one.

With the exception of Michonne and Carl’s relationship, this episode didn’t have a lot in the way of character development. Usually this would be a bad thing, but I’m coming to enjoy these ‘slice of life’ episodes that focus on one story as opposed to bouncing between all of the groups. They’re a nice change of pace in small doses.

‘I just thought Judith should— should know what her mom looked like. Thank you.’