In this podcast (at the top of this post and on iTunes) Nalini Haynes talks to actor-author Claudia Christian who you may remember as Commander Ivanova from Bablyon 5 and her co-writer Morgan Buchanan. Tor Publishing has just published their collaborative novel, Wolf’s Empire: Gladiator in paper and audiobook formats.

When her mother and brother are murdered, young noblewoman Accala Viridius cries out for vengeance. But the empire is being torn apart by a galactic civil war, and her demands fall on deaf ears. Undeterred, Accala sacrifices privilege and status to train as a common gladiator. Mastering the one weapon available to her—a razor-sharp discus that always returns when thrown–she enters the deadly imperial games, the only arena where she can face her enemies.

But Fortune’s wheel grants Accala no favors—the emperor decrees that the games will be used to settle the civil war, the indigenous lifeforms of the arena-world are staging a violent revolt, and Accala finds herself drugged, cast into slavery and forced to fight on the side of the men she set out to kill.

Set in a future Rome that never fell, but instead expanded to become a galaxy-spanning empire, Accala’s struggle to survive and exact her revenge will take her on a dark journey that will cost her more than she ever imagined. Wolf’s Empire: Gladiator by Claudia Christian and Morgan Grant Buchanan is available from Tor Books in paper, ebook and audiobook formats.

Claudia Christian can be found here:

Morgan Buchanan can be found here:

Here are the planned interview questions:

Tell us about your novel.

Can you read for us please Claudia Christian?

Why set your novel set in a far-future Roman Empire?

Who are your favourite characters in Gladiator?

What stories and writers inspired you?

How did your collaboration work, with you both living in separate countries and all?

Like many writers, you both have multiple careers. How do you juggle your commitments? 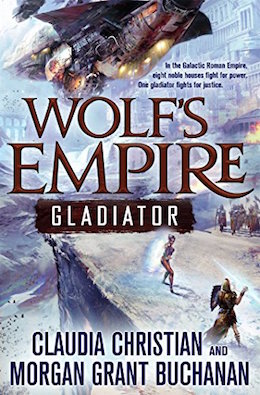