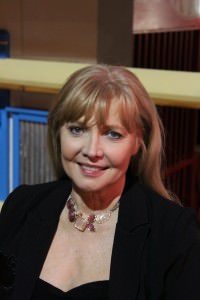 The interview is available in MP4 (video) and MP3 (audio only) formats, both at the bottom of this page.

Cindy Morgan has had a diverse career.  She’s been a weather girl on TV and her own sound engineer working autonomously in a Chicago radio station before moving to LA and landing THAT role in Caddyshack.  Although she starred in the original Tron movie, through no choice of her own Cindy didn’t appear in Tron: Legacy, and deeply appreciates the fans who lobbied to bring her back.  In this interview Cindy talks about her career, her deep appreciation of her fans and her upcoming book.

Oh, yes, and Bruce Boxleitner interview bombs.  You’ve heard of photo bombing?  Bruce takes this to a new level, bombing this interview.  Bruce and Cindy together are like an old married couple on a sit com; they are hilarious.  I caught the action in this video, before we returned to ‘your regularly scheduled interview’, while Bruce wandered off to be interviewed by someone else.  I’m sure Bruce would have been busy already IF HE HADN’T ARRIVED LATE [pointed look] 🙂  I caught up with Bruce at lunch time before he managed to escape, so his interview will go up later this evening.

UPDATE:  Bruce Boxleitner’s interview is up as is his panel on Babylon 5.