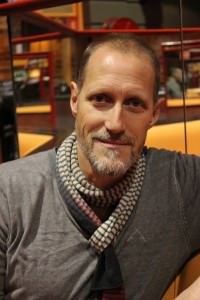 Interview is available in MP4 (video) and MP3 (audio only) formats, both at the bottom of this page.

After my first interview (with Cindy Morgan), I wandered back in towards the middle of the room.  There was a small group of people chatting but not being interviewed.  I recognised ONE of the three.  I asked Christopher Heyerdahl if he’d mind being interviewed.  He was happy to oblige.  As we walked over to settle in for an interview, he said, ‘I’m Chris Heyerdahl.’

I looked at him.  I said, ‘I know.’  I felt like kicking myself immediately because I think it sounded like: I KNOW -_-  but the alternative?  ‘I have a crush on your character John Druitt, I luuuuuuurve his voice and striking features and tortured soul.’  Not. Going. To. Happen.  If I’d said that, I would have gone bright red, stuttered and stammered and completely blown the interview.  How gorgeous of Chris to be so unassuming that he could possibly think I didn’t know who he was!  There were a few people there I wasn’t sure of – like Davros – but Chris?  No confusion. At. All.

Having worked on both stage and screen, Christopher Heyerdahl has a long list of science fiction and fantasy credits to his name.  In this interview Chris talked about being Todd the Wraith on Stargate Atlantis, being Biggie and Druitt on Sanctuary, his role as HP Lovecraft, working on the stage and his latest role as The Swede in Hell on Wheels, a Western.

Note that close to the beginning of the interview I mention something Doctor Gillian Polack said on Twitter last night; Chris threw his head back and ROARED with laughter.  Here’s the tweet I quoted.

@darkmatterzine I just realised – Christopher Heyerdahl is the most solid link between the Kon Tiki Expedition and Bigfoot.

The Kon Tiki Expedition is famous and notorious.  Thor Heyerdahl is a relative of Chris’.