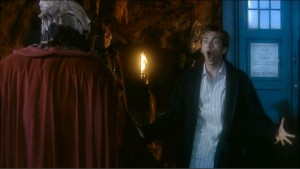 The ‘Christmas Invasion’ is the first of the Christmas specials in New Who but the second Christmas story: ‘Unquiet Dead‘ is also set on Christmas Eve. This review refers to the end of ‘Parting of the Ways’, you have been warned!

The Doctor barely had time to explain to Rose before he transitioned and then collapsed. In the ‘Christmas Invasion’, he wanders outside the TARDIS – parked near Rose’s mum’s house – still dressed like the previous doctor before collapsing. Rose then emerges to find her mum and Mickey wondering who the Tennant Doctor is, before helping Rose carry him back to Rose’s mum’s flat.

After settling the Doctor in men’s pajamas and the spare bed, Rose and Mickey venture to the shops to buy Rose’s mum a Christmas gift. Shades of the New Who pilot emerge when Santas in plastic-looking masks start shooting at Rose and Mickey.

The Doctor strolls around, Arthur Dent-like, in his dressing gown for most of this episode. Towards the end, he even makes a comment relating himself to the Hitchhiker’s Guide character, just for those who missed the visual reference.

When the Doctor decides to attack Harriet Jones to bring down her government, his attack is peculiarly misogynistic: it’s unlikely such an attack would have been as successful against a male head of state. Do not like.