Chris Heyerdahl and Chris Judge at Armageddon 2012 talk about their time working on Stargate as well as their careers since; available in both MP4 (video) and MP3 (audio only) versions at the bottom of this page. 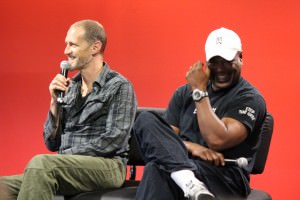 Chris Heyerdahl was Todd the Wraith from Stargate Atlantis and Chris Judge is best known as Teal’C from Stargate SG1.  They talk about their experiences working on Stargate both together and separately.  Judge obviously has a thing for fart jokes as this comes up in this panel as well as his solo panel.  Heyerdahl talks about working on True Blood recently, rubbing it in – literally – while Judge slumps in his seat.  Judge talked about pranks in the workplace, including repeating the story of his last prank on the set of SG1, being a ‘turd burglar’ (I kid you not!) and glad-wrapping the toilet seat for tired people first thing in the morning.  An audience member pranks Chris Judge though. Thinking about working on Star Trek energizes him. An audience member gives him a tribble to hold.  The owner fails to mention …  His reaction is worth watching.

Heyerdahl realised how much fans wanted to hear him say ‘John Sheppard’ in Todd’s voice, so he kept dropping it in all the way through.  Chris Heyerdahl doesn’t prank his colleagues endlessly. He talks about his work, his favourite scenes, JOHN SHEPPARD, what he’s doing now, JOHN SHEPPARD, Hell on Wheels, JOHN SHEPPARD…