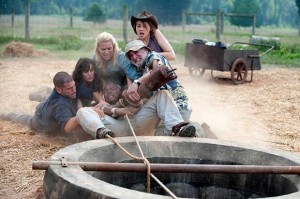 [Spoiler alert: review contains a synopsis of the episode]

Carl is recovering well after surgery to repair his internal bleeding when Daryl, Andrea, Dale, and Carol regroup at the farm.

A memorial is held for Otis at which an unravelling Shane is forced to retell his lies to a larger audience.

Hershel makes it clear to Rick that once Sophia has been found and Carl is fit for travel, the group will be expected to move along. Rick makes a heartfelt plea to stay and Hershel says he will consider it but only if the group respect his rules.

The group decide to continue searching for Sophia in a more organised manner. When gathering water, Dale and T-Dog find a zombie in one of the farm’s several wells. To stop any further contamination, the group decide to hoist the zombie out of the well only to have it split in half at the rim and its innards fall into the water.

Glenn and Hershel’s daughter, Maggie, go to the town pharmacy to restock medical supplies (and have sex). Rick’s wife Lori asks Glenn to pick-up an extra item for her and to keep it discreet. We discover that the item in question is a pregnancy test.

The episode ends with Lori discovering she is pregnant.

While I saw the ending of ‘Cherokee Rose’ coming from the moment Lori asked for Glenn’s discretion, I do think the storyline that is sure to follow will take our heroes down some interesting roads.

Daryl’s character, while not a big part in this episode, is showing more depth the further along the series progresses and so far I’m enjoying the development.

The zombie in the well was a good source of comedy relief (because nothing says humour like ripping a zombie in half). Shane is continuing his downward spiral; things for Sophia are looking grim; and I’m pretty sure Lori is soon going to be faced with telling her husband that she is pregnant and he is NOT the father. Zombie dismemberment may not seem like the obvious way to lighten the mood, but it works.

“Hey, I’m like you now. We’ve both been shot. Isn’t that weird?”
“Yeah, I think your mother would rather hear we got the same eyes.”