Months ago I heard Charlaine Harris was heading to Australia for a book tour and convention.  As soon as I heard this, I contacted the lovely people at Hachette, asking if I could please have an interview.  I was referred to Hub Productions for an interview: it seems there are technical contracty-type things that happen when people are flown over for these conventions.

Hub Productions’ publicist asked me to email her some interview questions to which she sent me a reply from her iPhone on Friday afternoon, in between Charlaine’s many other commitments.  This is why Charlaine’s interview is so brief and isn’t available in audio.

Late last week I received an email from Jaki, a manager at Hachette Australia, Charlaine’s publisher.  This email was titled ‘Top Secret’ and included an invitation to a breakfast with Charlaine Harris this morning.  I wasn’t allowed to tell anyone about it until today.  You can imagine how hard that was!  Hubby knew, but I kept my lips zipped and refrained from even dropping hints about what was happening. 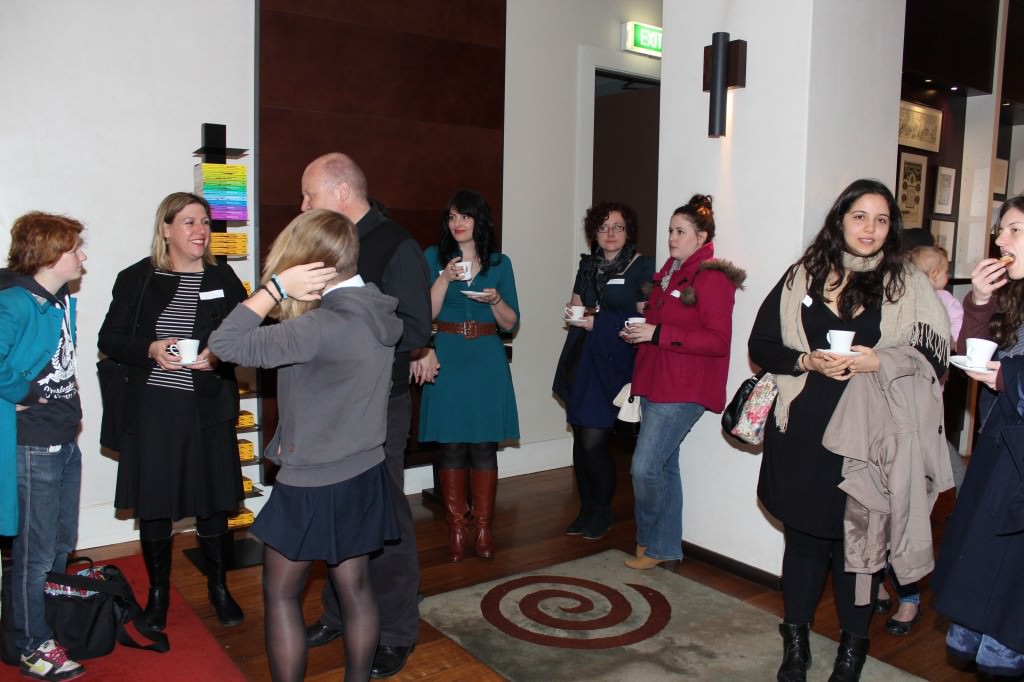 A small group of people gathered in the foyer of the Hotel Lindrum where we were welcomed in to the back bar by a senior manager from Hachette Australia (I think her name was Mary but I don’t have a great memory for names).  I also met Jaki Arthur, one of Hachette’s publicity managers, and another staff member whose name escapes me.  (Business cards are really good for situations like this: I can ‘remember’ names!  Gah!)

The back bar was a cosy room off the foyer with a bar full of essential coffee and tea making facilities, yummy pastries, a welcoming fire – probably gas but the flames looked real – and displays of Charlaine’s books.

It seemed most attendees were from Melbourne bookshops: places like Readers Feast, Dymocks, Mary Martins, Readings and Slow Glass Books.  Amanda Wrangles, author of books and Marianne de Pierres’ websites’ contributor, was also very visible although I managed to photograph her hair more often than her face.  A few faces were vaguely familiar but I’m not good with faces (funny that!).  Everyone was friendly.  It seemed that there was a pause in the beginning while people took a breath and looked around.  Then everyone worked the room, talking Charlaine Harris, True Blood and books in general.

Not long after I’d managed to finish my first coffee or two, Charlaine Harris arrived.  Charlaine was very personable, pro-actively working to put people at ease.  I chatted briefly with Charlaine before she did the rounds of the entire room, talking to everyone individually.  Charlaine strikes me as being a successful person with her feet on the ground; she hasn’t lost touch with the ‘average’ person.

While Charlaine did the rounds, Hachette staff gave out copies of Deadlocked, the latest and second-last instalment of the Sookie Stackhouse series, writing our names on post-its so Charlaine could be sure to spell them correctly.  I took my review copies with me to be signed and wasn’t sure of the protocol, so I asked if Charlaine would mind signing my review books to me and the new book for a competition winner.  She was very obliging.  Charlaine chatted with people while she autographed books, and then posed for photos with many fans. 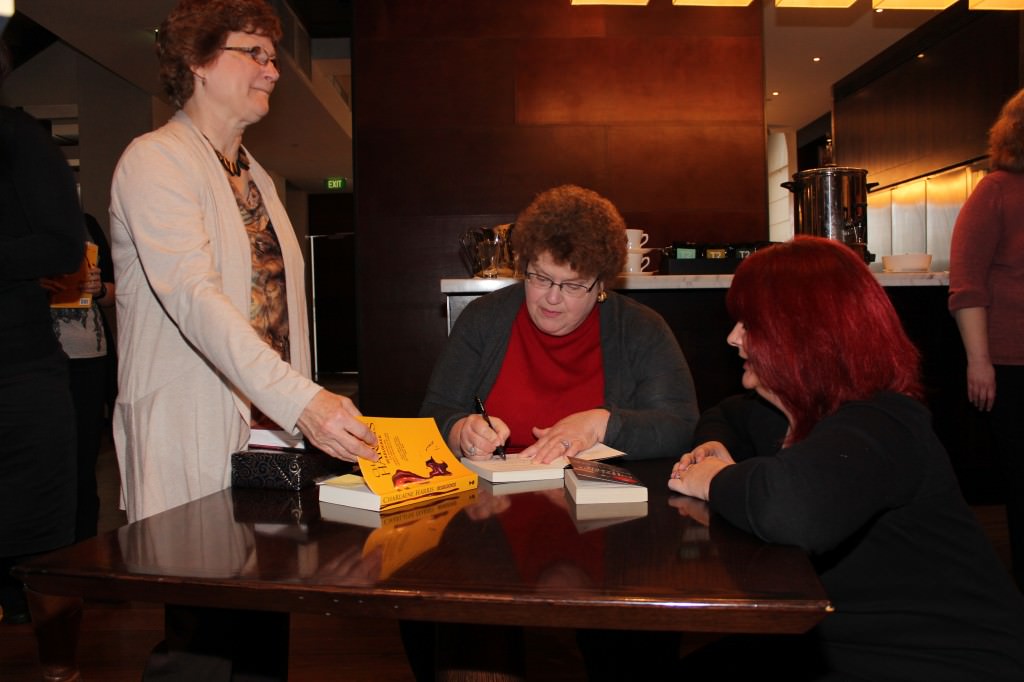 Inevitably the conversation came around to Hachette’s display of Charlaine’s True Blood/Sookie Stackhouse series.  A number of people commented on how pretty the series looks and how it makes a nice display on a bookshelf, something too often overlooked in book design.  I love the artefact and collecting matching sets.  Spines that stand together like this are a bonus, although I wouldn’t want too many sets exactly like this.  Apparently the story behind this book design is that Hachette were re-releasing the series, the artwork from the TV series wasn’t available in time, so this is the end result.

I finished reading Deadlocked on the weekend, just in time to meet Charlaine.  Deadlocked is the second-last in the Sookie Stackhouse series:  Charlaine is starting to wrap up many of her characters’ story lines in preparation for the final book.  While many fans may be disappointed that the series is ending, I’m a firm believer in leaving fans wanting more.  Furthermore, the foreshadowing in Deadlocked leads me to expect a good finish to the series.  Grab this now: get your chocolate-equivalent fix (blood-equivalent?) in preparation for the grand finale.

NOTE: None of my Charlaine Harris posts – nor any other posts – are sponsored.