My reviews of episode 1, episode 2 and episode 3 are at the links; I won’t repeat those observations here. For a comprehensive view of my thoughts on the Shannara Chronicles, I recommend reading my reviews in order. Thus you can avoid spoilers if you haven’t watched the earlier episodes.

All the central characters returned to Arborlon in the previous episode. Except, of course, the Dagda Mor (the Elven druid who was seduced by The Dark Side, queue Vader theme music).

Amberle enters the Ellcrys (magic tree) to be tested to see if she’s fit to carry the Ellcrys’s seed to the Bloodfire to regenerate the tree. As Amberle walks through a doorway into a cave inside the tree, the minion and I quip: ‘She needs a light saber’ and ‘Look out for Darth Vader’.

Although Amberle’s test had some parallels with Luke’s, this chickibabe passed. Her reward: a silver seed and a life-or-death quest. Yay. Katniss would be jealous.

If Amberle failed, there was no other hope. Unlike in Star Wars. So why the test? Because it’s in the book!

Alanon plots to ensnare the changeling demon who is murdering palace residents; the problem is, no one knows who the changeling is. I would have expected more suspicion like with the changeling threat in Star Trek Deep Space Nine. STDS9 started long after The Elfstones of Shannara were published so there’s no shedding of blood as proof of identity in this story. Shannara characters make no attempt to confirm identities before discussing secret plans to capture the changeling. None. At. All.

Wil goes back to his room to discover Eretria, who’s there to steal the Elfstones. Again.

Eretria throws herself at Wil and they struggle. For an hour. [eyeroll] All we see is some kissing and another shirt shed to reveal male pecs and abs. At the end of the hour, a naked Wil (seen only from his impeccable abs upwards) sleeps while Eretria takes the stones and flees. Fool Wil once, shame on Eretria. Fool Wil twice, how much of an idiot is he?

While Eretria runs amok through the palace, the Changeling takes her form and murders a few people. Then changes form. As you do. Meanwhile, Eretria is captured.

Apparently Wil is a humungous fool because he tells Amberlie that they struggled, implying a non-sexytimes time. Eretria is there and sets Amberlie straight. And relishes it.

Bandon, the young man freed from the cannibal mask, is a seer: when he touches someone, he sees the moment of their death. Those around Bandon ‘realize’ this is why his parents chained and masked him. (?!) It’s as if the writers are vaguely justifying brutal treatment of people with mental illness. Come on, guys: give us horror of the inhumanity, horror of the violence inflicted upon Bandon by his parents.

Cephelo (James Remar) is repetitive: he threatens Eretria with selling her into slavery (again) so she’ll enter the palace to steal the Elfstones. Although Eretria is kick-ass and has arleady gone solo successfully before, she obeys instead of running away. [eyeroll]

When Cephelo sees the elves holding Eretria prisoner, he follows. Later he sheds his narcissistic skin, putting himself at risk to help Wil. This change of personality lacks justification, reeking of ‘because plot’.

Characters tell one another ‘it’s not your fault’ so many times that it could be a drinking game for this episode. Wil says it to Amberle, the king says it to his second son, Ander Elessedil (Aaron Jakubenko), and on and on. Ironically, it was Ander’s fault that his older brother died: Ander had sexytimes outside in the forest.

Queue more discreet camera work; why all the sexytimes and allusions to Game of Thrones while wussing out? Either make the series family-friendly or make it sexy. Fish or cut bait, people!

Ander used a poorly-hidden ‘secret’ door to re-enter the palace. Gnomes saw where and how to use the door and followed. The guard inside the palace had his back to the door. Seriously?! He couldn’t have faced the door and died while valiantly defending the city? It had to be a knife in the ribs from behind.

Thus, 10 years ago began an invasion ending in the death of the king’s eldest son, elevating obnoxious Arion to heir apparent.

Dual storylines are established, creating opportunities to drive the plot forward, increasing the stakes. Alanon stays in Arborlon to defend the city against the ravening hordes while Wil and Amberle set off on their quest to restore the Ellcrys, to banish demonkind back to the Forbidding. The minion soaks up this fantasy television series as I used to: grateful for something of good quality in a genre that he loves. I’m less enamoured of the series — it’s no West Wing in the SFF genre, nor is it another Star Wars or The Expanse — but I’m enjoying it nonetheless. At the moment. However, the change of director between episodes 2 and 3 heralds poorer quality control. 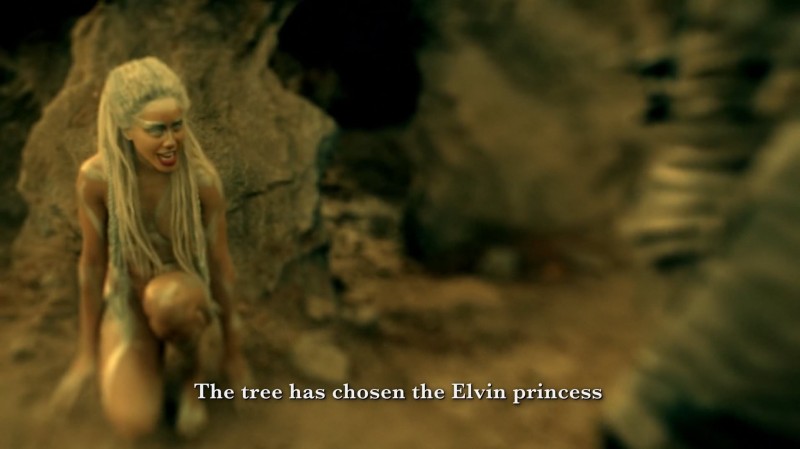 Cheese with hints of more cheese to come.