Trigger warning: drug & alcohol use including by teenagers and preteens; domestic violence; rape

Centre of My Everything has several point of view characters who are all either teenagers or in their early 20s. Justin is an ex-meth-head, trying to dry out without support so he’s returned home to his drunkard father. Tara has a reputation for being the town slut that simply isn’t true but she is a party girl. Corey is a boozer, 18, and can’t get a job. But he’ll tear the town up. Including the graveyard when he’s on a bender. And so it goes.

Set in contemporary rural Australia, Mildura to be specific, the location could be any small town or even the rougher suburbs of a city. Frustrated limited parents living in the bottom of a bottle set the example for offspring determined to out-drink their parents.

One of the central characters, Margo, is Indigenous. Tara and her gang made Margo’s life unbearable. Margo’s parents are obsessed with not drinking because of racist beliefs about Indigenous people being alcoholics (while just about all the whites seem to be alkies except the ex-druggie). This thoughtful representation of Blackness and dealing with racism is, in my opinion, exemplary. However, I’m not Black so I’m interested in hearing from Black readers.

Outside of the central characters, there aren’t many women in this story. There’s Margo’s mum who works in the hospital and was raped (giving her Margo). She’s strong, perceptive and supports Tara after the rape. And yet, as a nurse and part of a small nuclear family without drug or alcohol issues, I expected them to be better off financially.

The only other woman who really features is Tara’s mother who is an absent parent, phoning in from time to time after abandoning her 16 year old daughter. Her excuse is that her parents made her the “centre of my everything” and she couldn’t stand it. But the truth is that a man is the centre of her life, whichever man she has in the moment.

The adult men (parents) are all alcoholics apart from Margo’s Black stepfather and most seem prone to domestic violence. One goes out looking for excuses to king-hit people, which ends well. Not.

I lived in small towns growing up and knew people like this. This story exposes the underbelly of white Australia. Although these people all seem to be on the poorer end of the spectrum, this kind of behavior is rife in wealthier classes too. The difference is, money buys opportunities including employment, entertainment (not-boredom), and coverup.

Centre of My Everything is contemporary Australian young adult fiction depicting poverty, boredom and frustration common in that age-group. Behaviors have consequences, which Webster incorporates into the story without preaching. Personally I found this story rather harrowing. But I felt it was “true”, a fictionalized version of the lives so many live. And, perhaps, if students read this in schools with adequate discussion, perhaps some teenagers can escape their ghettos and make better choices.

Read The Centre of My Everything if you enjoyed Ruby Tuesday.

If you’ve experienced rape, domestic violence, mental health issues including depression, or need help with drug and alcohol addiction, please seek help. Lifeline is a good place to start and, if necessary, ask for contact numbers for your area and specific circumstances. Their number is 131114. 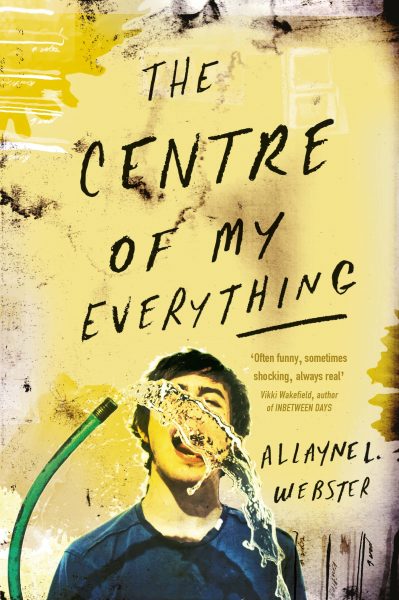