Hotshot lawyer Michael Grey (Balfour) is on his way to making partner while leaving a trail of adultery and corruption behind him. When the murderer he has just released on appeal stabs himself with a pen in the lawyer room of the prison, Grey is framed as the murderer.

In an ironic twist, Grey ends up sentenced to the same prison and cell his client inhabited. It gives Grey time to reflect on the crimes he wasn’t caught for and someone is reflecting on them with him …

As much as I wanted to like it and was looking forward to it, I didn’t enjoy Cell 213. It had an interesting premise for a great scary movie, a decent cast and a good filming location. Unfortunately beyond that Cell 213 failed to impress.

Cell 213 felt like it had a beginning and an (underwhelming) end but no middle. The entire film felt like it was leading up to something that never happened. There were unaddressed plot points throughout the film. Several unnecessary plot points are raised that have no pay-off.

Bruce Greenwood and Michael Rooker gave good performances. However, the characters were poorly written and would change personalities from scene to scene with no explanation as to how or why.

To make a character as detestable early on in a film as Michael Grey and then have them be the protagonist makes it difficult to care that they are being tormented. From the moment he appears on screen to the moment he is jailed, Grey is a loathsome character. He cheats on his wife, doesn’t care that he is freeing the scum of society and is corrupting the legal system. It doesn’t inspire the audience to root for him for the remainder of the film.

With underused resources, weak character development and several unanswered questions at the end of the film, I recommend giving Cell 213 a miss.

IMDB rates Cell 213 at 5.2 out of 10; on IMDB anything below 7 is suspect and below 6 is dire. Rotten Tomatoes rates Cell 213 at 3.5 out of 10. Nuff said. Watch at your own risk. I have no idea why CJ tried it out but then she loooooves bad horror, like Sharknado. However, for CJ to love bad horror requires lashings of CHEESE. I prefer keeping my cholesterol down. — Editor. 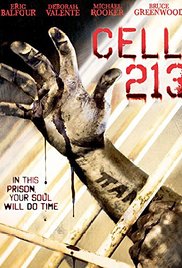