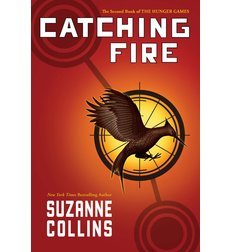 Katniss survived the Hunger Games to return home a victor, an icon of hope for the twelve Districts suffering under Capitol rule. President Snow informs Katniss her charade with Peeta, her maybe-lover co-victor, has not fooled him. Snow tells Katniss he will have all her loved ones killed unless she calms the districts and convinces him her love for Peeta is genuine.

Katniss struggles with national politics, her love for her family and her romantic triangle endangering both Gale and Peeta. Putting her best effort into convincing everyone of her true love for Peeta – after warning Gale – Katniss is horrified when she inspires rebellion.

Last year’s enthusiasm for the movie warned me Katniss returns to the Games as a tribune to fight to the death once more, so I don’t think it’s too much of a spoiler to mention it here. This plot development is close to half-way through the book. Authorities handle these these games, the tribunes and all previous victors differently from the first novel. At least until the killing begins.

Catching Fire carries Katniss into new risks, mires her, unprepared, in politics and plots. Fans of the Hunger Games will love the second installment in the trilogy. Act Two forges ahead quickly, unfolding events with an element of mystery alongside the danger. This novel ends in a cliff-hanger, so be prepared. The good news is the final installment, Mockingjay, is already in bookstores.

4 out of 5 stars for Catching Fire, marketed for grades 6 to 8* by Scholastic in Australia. The fans are far more diverse in age than the marketing anticipates.

Many Battle Royale fans criticize Collins for “ripping off” her plot but, as far as I can tell, Collins’s story is aimed at a younger audience. And isn’t nearly as bloody.

Updated to ‘feature’ the book image and fix SEO problems.