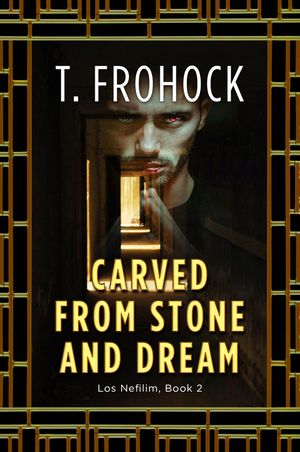 Carved from Stone and Dream starts several years after Where Oblivion Lives and is a very different novel although it follows the same characters.

The year is 1938. The Spanish Nephilim, Los Nefilim, are children of angels and humans with a few exceptions like Diago whose parentage is an angel and a demon. Diago’s daemonic heritage gives him powers slightly different to those with only angelic parentage but it also drives a wedge between him and his comrades in arms.

Franco has taken over Spain so the Los Nefilim fled to France. Some, like Diago and his general Guillermo, actively fight Nephilim allied with Franco. As the story opens, they’re on a mountain pass. Snow and ice pummel them. Their enemies pursue them. If this reminds you of Lord of the Rings, take a gold star.

Like the Fellowship of the Ring who entered Moria for reasons beyond their control, circumstances force our heroes underground. Those who survived the encounter with the bad guys, anyway. And here it gets really tricky, with caverns, boobytraps, and pocket universes.

Meanwhile, in France, Diago’s son Rafael works in a nightclub dealing with gangsters and Diago’s husband Miguel is in a refugee camp. A not-so-safe refugee camp.

Although Germany has not yet invaded France in this novel, the reader knows a Nazi storm is looming on the horizon, adding tension.

Diago and Miguel are in love but are separated by hundreds of miles and a war. Rafael is supposed to be safe in France but he’s a teenager intent on proving himself. Nuanced characters hook the reader. A thrilling plot never lets up. Even on the last page, Frohock foreshadows events in the next novel.

Add to this Frohock’s research! When reading Where Oblivion Lives, I was convinced she made errors. I hit the internet, determined to call her out. Frohock totally schooled me. In Carved from Stone and Dream, Frohock blends fantasy with commonly known features of Nazi Germany including their fascination with the occult and medical experiments on human subjects. These historical elements entwined with the plot create a compelling story.

This year I’ve noticed fascist themes in the books I’ve read. Several books are in the period around World War II, dealing with Nazis and Franco. There was Pan’s Labyrinth set in Franco’s Spain, Promise is set in Nazi Germany, This is Gomorrah deals with Neo-Nazis, Frohock’s previous novel Where Oblivion Lives involved a trip into pre-Nazi Germany in the late 1920s, and there may have been more. Not to mention my incessant referencing of Snyder and Mitchell’s Cultural Locations of Disability, for its expose of how Nazis mass-murdered disabled people before they started on Jews, Gypsies and others.

Anyone would think the current state of politics reflects what happened between 1920 and 1950. And that authors are concerned, sounding the warning bells.

Diago, Miguel, Rafael and Guillermo take us into dark places. Their relational character arcs are compelling. Danger, resistance, striving to remain free of fascism, are all relatable in this contemporary era. And the plot is a page-turner. Although Carved From Stone And Dream is darker than her previous novel, I highly recommend it.