Carly Findlay contributed to the Authors For Fireys fundraiser in January 2020. This mammoth undertaking was organised by Emily Gale and Nova Wheetman. They raised $513,149 to support firefighters and to help Australia’s bushfire survivors.

Carly appeared as a guest blogger on Dark Matter Zine to promote the Authors For Fireys fundraiser. She said:

I’m taking part in #AuthorsForFireys – an initiative started by Emily Gale. Authors are doing online auctions to support the CFA (Country Fire Authority). So many people I know have been fighting fires or have evacuated from fires. My parents are near Albury and have their bags packed, ready to leave if needed.

I am a novice card maker but I made the pictured card. This is a thank you to Carly for appearing as a guest on Dark Matter Zine and for supporting Australia’s firefighters. 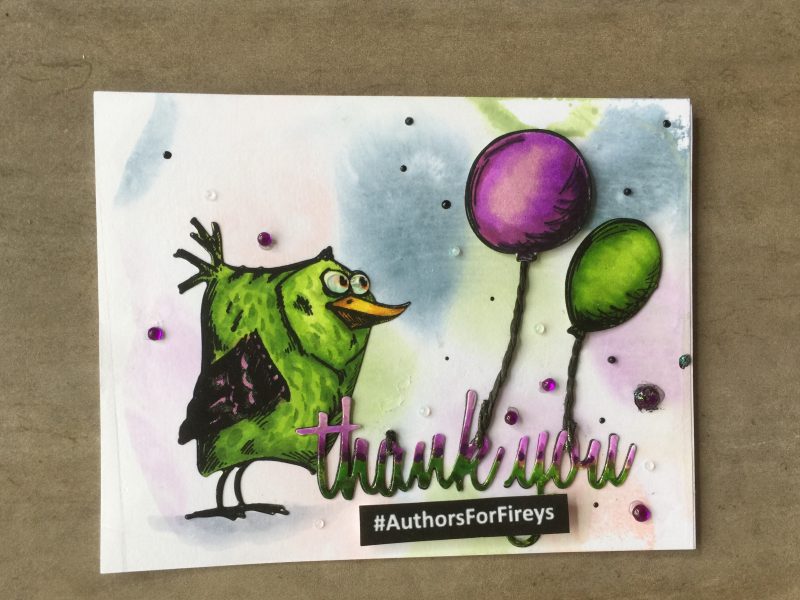 This card is the first survivor that I struggled with. I tore up the card I made before this one and later regretted it. This card is what they call a ‘hot mess’ but I already regretted throwing its predecessor away. Possibly because of my vision impairment, I struggle with color selection and placement. I know (more or less) when the colors are good and the placement is pleasing but actually composing something? That is REALLY hard. When I was at art school I got distinctions and high distinctions but what I did wasn’t card-making. I didn’t compose images like this. I followed briefs and obeyed rules. Now I’m learning new rules.

I love the colors I’ve used here: purple and lime green really appeal to me. Emma Streeton’s daughters loved this card, partly for the colors. And I hope Carly, who loves bright colors, will also enjoy them.

Through the course of making this card I also realized how hard it is to place those little dots artistically. I put a couple down and thought they looked stupid, so I put more down and more and nearly had a panic attack because I couldn’t make it look like the cards I see online.

In the end I removed a third balloon because it was TOO MUCH, took a deep breath, and didn’t bin the card. While I feel self-conscious about this card, I figure that if I set my standard higher than “I did the best I could and I learnt something” then I’ll end up frustrated. No cards will be sent. Then no more cards will be made.

So I hope this card and all the rest will be accepted in the spirit in which they’re sent. And that’s including online comments. Please be kind.

My history with card-making

I’m learning. I started trying to make cards when I was 6 after a kindly woman gave me used cards. Mum wouldn’t give me scissors to cut pictures out with, or paper to make new cards or paper to use as inserts to cover the previous writing. I couldn’t even get my hands on pencils outside of school. When my half-siblings were older, we had paper and pencils etc, but all I was allowed to do was color picture books that no one else wanted. Mum disliked cards. I think she discouraged me from art simply because failure was not an option and she always knew I was vision impaired: she assumed I’d fail therefore I should not try.

Later, I went to craft groups and lovely ladies like Shirley Davidson guided me and loaned me things to help me make cards. I desperately wanted to do more but we were so broke I couldn’t afford tools etc. And, I admit, I didn’t investigate how much embossing powder (for example) was. After Shirley explained I’d have to buy my own, she also said it was really expensive. I don’t recall pricing embossing powder but I did look at the cost of stamps and was “gun shy”. Now I think I probably could have bought my own embossing powder, with Shirley so willing to lend me stamps and tools. I wish I hadn’t dropped out due to costs.

In the naughties I revisited scrapbooking once we got above the poverty line. Just when I’d found a lovely shop that ran classes in Adelaide, I started the Bachelor of Visual Art so I stopped doing extra classes. The University of South Australia effectively expelled me for being disabled after the Australian Human Rights Commission ruled the uni had discriminated against me. Then I was so caught up in my grief that it didn’t occur to me to return to scrapbooking classes!

In the 2010s while living in Melbourne I tried again but I didn’t have the tools, didn’t know anyone, didn’t attend classes. I recently found some very simple Christmas cards I made at that time, still unused.

So now I’ve started again. And this time I’ve invested some money in buying tools because, again, I don’t know anyone who’s doing this sort of thing. I have no one to share tools. However, THIS time I’m spending time watching YouTube videos and reading blogs to learn how to make cards and do scrapbooking. It’s a work in progress.

Follow your dreams and persevere. When my mother-in-law was 45 and dying of cancer, she said one of her regrets was giving up on art after an awful adult education art teacher humiliated her. Don’t be like Ruth: have memories not regrets.

Stay safe and have fun!