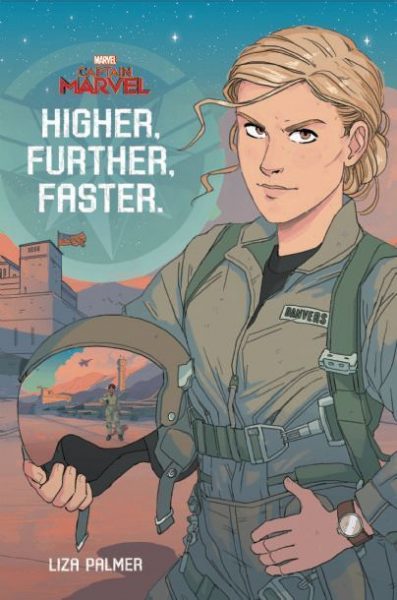 Carol Danvers is not yet Captain Marvel. She’s driving towards the US Air Force academy for her first day of airforce college. She’s wanted to fly her whole life. She’s obsessed with driving higher, further, faster.

On the way, she sees a woman in a car chasing a sports car that sideswiped her, leaving significant damage. The driver took off instead of swapping insurance information. Danvers takes off in hot pursuit.

This impulsive decision ends with a state trooper giving Danvers a ticket that says “Let yourself learn”, which is Danvers’s lesson for the year.

On her first day, Danvers runs foul of Captain Jenks. His white-blonde hair and ice blue eyes mark him as a stereotypical Nazi-type, foreshadowing his intolerant attitude towards all minorities. This includes women in the Air Force.

(I have previously ranted about representations of albino-types as Nazis. Palmer’s description of Jenks makes him part of this cohort. When will writers notice that the worst bigots look ordinary, average, instead of looking like part of a minority group?)

There are some spoilers further down the page. You’ve been warned. If you don’t want spoilers, stop reading here — and read this book or give it to every child but especially every girl in your life. I also enjoyed this book, so I recommend Higher, Further, Faster for adults who enjoy YA.

It’s a G or PG-rated book: intended for kids, no sex or drugs, but there is rock and roll.

Although this Captain Marvel novel reads as if it’s a contemporary fiction novel not a fantasy novel, Palmer references the larger Marvel Universe. She mentions Stark Industries’ logo on military hardware. Danvers’s internal monologue mentions Captain America. Otherwise, this Captain Marvel story could have been about a real woman, with apologies to whomever was the first woman test pilot for the US airforce. I like that the story doesn’t co-opt the kudos of whoever was the first woman combat pilot.

Danvers’s friends come to include a white guy who fits within the narrow scope of Jenks’s ideal airman. Bianchi begins by dismissing Danvers and Rambeau, an African-American woman who shares a room with Danvers and becomes her best friend. Over time, Bianchi comes to appreciate the women’s strengths and to accept his status as 3rd best in the class.

My way or the highway

Jenks belittles Danvers and Rambeau at every opportunity, telling them that he will prevent them achieving their dreams of becoming combat pilots. Danvers and Rambeau respond by working and training harder to become the best in their class. Jenks remains a bigot. He’s the villain and the obstacle they need to overcome.

But he’s also the whetstone whose abrasive surface hones the blades that are Danvers and Rambeau. Danvers in particular is driven to seek approval as if someone else’s approval will give her self-worth.

Throughout this story, Danvers’s challenge is to internalise her self-worth instead of allowing others to bestow or withhold worth. While anticipating that Jenks will block her from becoming a combat pilot, Danvers grieves and struggles to come to terms with her loss. Her growing group of friends challenge her regarding her real goals, her real priorities.

I relate so much to Danvers during this story. I found Danvers’s story arc to be encouraging, relatable and uplifting. My main criticism (apart from using an albino-type as a Nazi-type) is that I think Danvers would have experienced more grief, more of a gut-punch, when her fears came true. Even though she grieved in anticipation, I still think her fears becoming reality would have hurt. The loss of hope wounds.

Captain Marvel: Higher, Further, Faster is an excellent novel for middle school and high school students with the exception of the use of the ‘albino-type as neo-Nazi’ trope. I would love to gift Danvers story arc to every girl and boy. She learns to learn. Part of this is striving, letting herself down, working hard and not making it look easy. Too often success looks easy so the reality of hard work is discouraging. Teenagers need to see the reality of hard work, and that it is never wasted, not even when we (or they) need to change direction to find a new goal. Highly recommended.