The Returned is a French TV series about a group of people, including Camille, who return from the dead to a small country town.

A class takes a field trip. They’re driving through the mountains on a bus when the bus swerves and goes over the edge. All on board die.

Four years later families are trying to go on with their lives. A support group meets to discuss the memorial.

Some of the victims return from the dead.

Camille (Yara Pilartz) wakes up in the mountains and walks an hour to get home, where her mother can’t believe her prayers have been answered. Mom (Claire played by Anne Consigny) is emotional. She hides the shrine to her daughter and pretends the past 4 years never happened while calling her ex-husband and new lover to see Camille.

The lover (whose name escapes me and I can’t figure it out from IMDB) is the facilitator of the support group. He tells Claire and Jérôme, Camille’s parents, that this has happened once before. Jérôme is a bit of a dick so he says he doesn’t want to hear about that.

When Lena (Jenna Thiam), Camille’s sister, comes home, Camille is hysterical because she realises something is wrong. Her sister is 4 years older.

A doctor, Julie Meyer (Céline Sallette) visits an old man, Monsieur Costa (Claude Lévèque) to give him an injection.

Costa is rattled after his daughter came back from the dead and yet he lies to the doctor, telling her he’s alone in the house. His reaction is unexpected, leaving us with another mystery.

Julie returns home followed by a creepy boy who acquires the name Victor (Swann Nambotin); Victor may have supernatural powers. He reminds me of Shane Botwin from Weeds: too old for his years, too powerful and a dreadful enemy. With the literal meaning of the word ‘dreadful’.

The Returned passes the Bechdel Test because there are several women characters who talk to one another without men present, like the mom who is emotional about her daughter returning home.

None of the actors are familiar because they’re French, which is a nice change. Also, like British TV series and unlike US series, the actors tend to look different instead of like replicas of one another so I’m not confusing Jon Snow with Rob Stark and the like.

Reading subtitles is not one of my strengths but the subtitles are in white Arial font (I think) and they’re quite large and bold, at least on my 55-inch TV. I sit somewhat closer to the screen than the average bear so, although I missed a line or two because I was looking at the action and I missed some of the action because I was reading the subtitles, I followed the story.

The Returned ran for 2 seasons from 2013 to 2015 while Glitch, an Australian ABC paranormal series with a similar premise, started in 2015. Both are set in small country towns, both have dead people returned to them with varying consequences. I’m not sure if Glitch is an Australian remake — there are similarities but huge differences in the pilots’ plots — but, regardless of the similarities, I’m interested in following both. Both series use drama, mystery and suspense as a vehicle to examine human nature and relationships. Neither series has even a faint odour of a US remake of a UK series. Not a whiff of Life on Mars. Not a one. Yet. Fingers crossed.

On the other hand, there appears to be a US remake of The Returned. Good luck with that.

The Returned may have a whiff of Buffy-itis. This TV series is based on a less popular movie called They Came Back. The Returned ‘Camille’ has 8.2 on IMDB while the movie has 5.9 (both scores out of 10). I wonder if the writer Robin Campillo is the French version of Joss Whedon?

‘Camille’ is a little slow. Although it’s admirable that so many characters walk everywhere or take public transport, these scenes tend to slow the plot although, at times, they build suspense.

The same applies to scenes where we’re waiting for something to happen. A shot of the doctor sitting alone watching a horror movie establishes her character but, when it’s building to — dun, dun, DUNNN — a phone call, the scene could be shorter. In contrast, when the doctor is doing mundane tasks in her flat and we’re waiting for the creepy Victor to insinuate himself, THAT scene is suspenseful, building tension. Thus the pacing feels a little uneven.

Overall, The Returned episode ‘Camille’ has a solid pilot, it builds characters and exposes conflict. Bizarre behavior preceding a suicide is perplexing. A murder raises the stakes: was the perpetrator a returned? Or was he someone else? The bus accident, shown in full at the end of the episode, raises more questions. The Returned is a paranormal thriller waiting to ensnare you in its coils. Highly recommended. 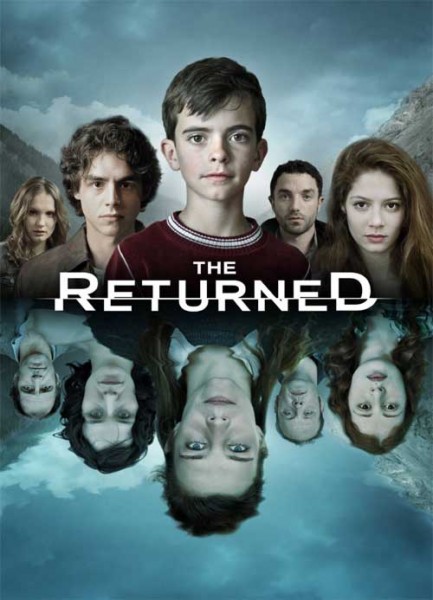