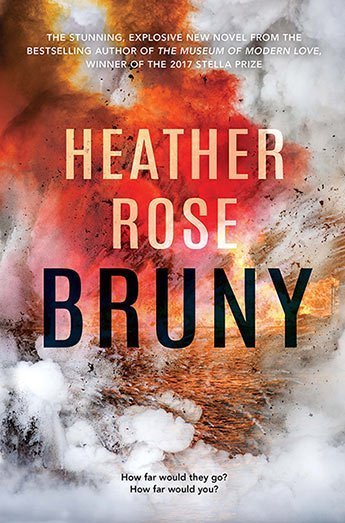 I pick up Bruny, stroke its cover. Turning it over, I puzzle over how the cover seems an inviting orange despite the image of a bushfire, something that terrifies me from my time growing up in Tasmania. Then the pull of ‘home’, the sense of being Tasmanian and yearning for that which is MINE, asserts itself.

While the cover illuminates the desktop magnifier’s computer-like screen, I brew a coffee. Then I settle, sitting in a half-lotus position although I’m in an ergonomic chair.

My fingers slide across the cover. I open the book, glancing at the praise for Museum of Modern Love, the author bio… There’s a map. I read it, mistaking water for land but the map makes no sense. My perception shifts, switching land for water. The map still feels disorienting. I realise that my memories of Bruny Island are so ingrained that, to me, I anticipate Bruny as an island on my left while travelling south. I have to flip my mental image to match traditional orientation.

The bridge to Bruny

In Bruny, a bridge is under construction to circumvent the need for the ferries to and from the island. These ferries have been running for a hundred years. The author describes Tasmania as a tourist and gourmet destination, which is already true. Her account of the residents versus the tourists is accurate today. I smile, musing that my father, who owns a block of land on Bruny Island (called just ‘Bruny’ by the locals) would be considered a ‘shack’ owner and, with his basic shed passing for a home, is probably frowned upon.

Local security watches a suspiciously military style boat lurking near the bridge then fleeing. Those watching cannot see what the reader knows: the people on board do not remove their balaclavas after hauling up a netted catch devoid of sealife.

The bridge topples. The drama begins.

The premier of Tasmania and the Leader of the Opposition hold forth for the media’s benefit. THEY ARE A BROTHER AND SISTER. Hilarious and not entirely unbelievable in Tasmania, although I wonder what Christmas dinners would be like with that family! Oh the dirt they’d have on one another!!! Like the days of Tim Costello (social welfare professional) and Peter Costello (treasurer for Australia’s most prominent conservative party, the Liberal Party).

I pause to jot this down because I’m notorious: if I don’t write reviews while I read a book, I will struggle to find anything to say after I’ve finished. Now that I’ve made these notes, you — my readers — can go for coffee. Because I probably won’t be back until the end of the book, unless Rose’s story includes mentions of social issues that force me to tear myself away from what I expect to be a riveting plot.

Bruny vs the niqab

On page 7 Astrid Coleman, aka ‘Ace’, dons a niqab to comply with convention during a meeting where her mouthpiece will be an American ex-president speaking to an emir.

She muses on the anonymity of the niqab, how it shields her from scrutiny while allowing her to observe others (p. 8). However, in other books and movies the comment is made that this invisibility has drawbacks as well. Only a white woman who uses the niqab as a costume — like the nondisabled person sitting in a wheelchair or wearing glasses to reduce their vision to legally blind levels for a few hours or days — would see only the benefits. From this character’s point of view the observation is consistent. Her target challenged Ace’s costumed feeling of anonymity, which gave a modicum of balance.

Ace is here to set the captives free, hundreds of broken women, some of whom had been as young as 7 when they were captured for use as sex slaves. Apparently not only are the religious warriors given sex slaves, but if they have a sex slave they are given an additional stipend. The complexity of a society geared towards self-righteous oppression of others!

“…I had seen the tens of thousands of refugees made homeless. I know how many Yazidi daughters had died… But when I saw a man like the emir, I wondered about the power of an ideal. The certainty of a belief. Would I ever kill for an ideal?”

A few paragraphs later, the emir speaks to the ex-president:

“Christians have killed millions of my people without cause… What was the war in Iraq if not an assault by a Christian coalition on my people?”

These passages are even more powerful in their unabridged form. Rose appears to be foreshadowing the character arc to come while also going straight to the heart of the human condition in that intersection between religion, freedom and the consequences of international political manoeuvring, some of which is happening right now. (Update: these passages did foreshadow what was to come but the novel is not about Muslims. There was a twist. I’m not saying any more.)

I don’t want to stop reading to write these notes but if I don’t take notes I won’t remember the finer points later. This is such a powerful novel! I’m in awe.

Rose talks about how many people in Tasmania are related so it doesn’t take long to work out connections when meeting new people. My family is similar: one branch moved to Tassie in the 1830s, another branch in the 1880s. Mum preferred to keep me hidden: she was always embarrassed about my disability and that she was living de facto after separating from but not divorcing my father. This means I’ve been largely segregated from the family but I’m aware that I’m related to a significant portion of north-west Tasmania as well as St Helens as well as… In short, Rose knows. Some may be offended but it’s an island state.

I’m not entirely convinced that the Tasmanian education system is in as dire a situation as Rose depicts but then I’m comparing with my children’s experiences after moving to Adelaide. In my opinion the education system is being dumbed down, films replacing books in English Studies, children not learning their times tables until late in primary school if at all… So the situation is dire but it’s not just in Tasmania. And the situation has always been that people from Tassie would go to Melbourne for certain medical procedures, sometimes being medevac’d by our public health system (universal health care). I suspect that Rose is aware.

Rose also talked about politicians’ ‘good ideas’, including the fully-funded hospital in Melbourne that couldn’t afford to have any patients but was running anyway. That’s a historical documented fact. From this century. Rose’s research is impeccable.

However, Ace’s ruminations about global politics that, to me, embellish the story with their added context, may not be appreciated by some readers. The politics is strong with this one (book), so you’ve been warned!

Time and time again, Bruny touches on real political issues and trends that are occurring today or have been documented as fact. The deep research and realistic framing of this story sends chills down my spine. Rose’s plot references the Chinese buying up Australia. This is fact, right down to Australian governments leasing the Port of Darwin to the Chinese and allowing unrestrained Chinese real estate purchases including heritage farming properties. Peter Dutton’s Home Affairs Dept has facilitated Chinese visas and immigration.

The conservative Liberal Party that currently is in power in Australia includes Gladys Lui, who is I believe in violation of the constitution because as a former employee of the Chinese government’s propaganda organisation, she should not be allowed to stand for election let alone govern our country (Liu claims she ‘can’t remember’ if she was connected to groups with political power in Beijing, “She said she could not remember being a council member of the Guangdong provincial chapter of the China Overseas Exchange Association between 2003 and 2015…At that time, the association was an arm of the Chinese government’s central political and administrative body.” The Chinese government has “poisoned the [political] well” by embedding agents in governments overseas.)

Combine this factual background with Rose’s fictional events and the result is chilling. I hope we don’t look back to see Rose as another Orwell or Huxley due to her predictions.

Ace returns home and, on the drive from the airport, sees Mount Wellington for the first time that trip.

…my heart did something warm and wobbly…. It’s the great wild magnet for everyone who lives on the city’s slopes. Every Hobart resident knows to look west, back over the mountain, to assess what to wear for the day.

Whenever I go to Hobart it is the sight of the Mountain that reassures me I’m home. I grew up in its shadow, first living there then visiting then living in Hobart again. My husband is the same: he grew up in Lindisfarne, in a house with a view of the mountain. We see the mountain and we know we’re home.

It is this level of detail that assures me, a Tasmanian, that Rose has lived in and loved Tasmania too. It is this level of detail that is missing in every story where an author misappropriates stories without doing their research. This is why Lionel Shriver is wrong, this is why misappropriation of — for example — disability stories is so offensive: without the respect given that is evident in research, authors are at best ignorant but they often (usually) perpetuate destructive tropes by not researching appropriated stories sufficiently and consulting ‘natives’ as beta readers. In contrast, Bruny’s little details are a balm to my homesick heart.

Note to writers: live the life and/or do your research & consultation OR DON’T SEND ME YOUR BOOK TO REVIEW. KTHX BAI.

I love Bruny. Its rollercoaster plot, romance and compelling question: how far would you go? What is your ideology? What would you do to protect your home? Rose rattled me, chilled me, thrilled me. A book not to be missed.