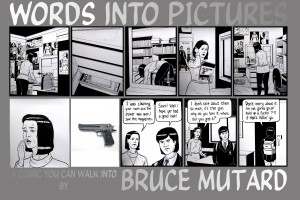 Greetings to you all,

Hard to believe but after five and a half years, my Masters in comics is 99.99% done. It’s my first big new work in many years and is one of many reasons why the The Fight has been delayed for so long (and it’s still not really likely to appear until 2017).

It’s called Words Into Pictures, which reflects my having undertaken an in-depth study into the medium of comics, what it is, how it really works, what does it mean to tell stories or communicate anything with juxtaposed narrative images. One thing I learned is that we have to move past McCloud’s Understanding Comics, which is not really helpful towards understanding the medium. Knowing about closure and those six types of transitions are useless when it comes to making good comics.

Anyhow, this comic has been created expressly to be exhibited, not read in print. That is, you must encounter it in public, in person, moving around with respect to the work, rather than you turning pages in an intimate encounter with a book. This work is much, much larger than you are. I created it as one way to start exploring what is really going on inside the medium of comics (and it’s not literature). In this case, I have literally exploded it, deconstructed it so that the usual modes of encounter with comics and exhibitions are challenged. You’ll be in a large gallery space trying to figure out how to encounter this comic which you normally would be reading… so how do you approach it? That is up to you.

The exhibition starts on Tuesday July 15 and runs three days until July 17. That seems ridiculous but it is an examination exhibition, meaning it has been set up expressly for the benefit of my examiners. They are currently in possession of my exegesis – the written document – which you won’t have access to yet, though I may put it up or print it down the track, depending on the result.

I am however, going to have a nice drinksies and gathering on the evening of July 17, from 5:30 to 7pm. Not the most convenient of times but it is being held on campus in the faculty masters gallery and there are lots of rules about holding public events like this. So, I am inviting you to come along and take a gander at it in the way it is meant to be ‘read’. Will it see print one day? Probably, but it will not be the same work. You’ll understand when you see it that there are things that simply can’t translate to print.

COULD YOU DO ME A BIG FAVOUR AND LET ME KNOW YOU’RE COMING SO I KNOW HOW MUCH I SHOULD CATER.